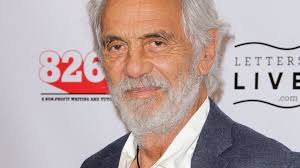 Tommy Chong, one-half of the marijuana-loving “Cheech and Chong” comedy duo, is battling prostate cancer, he announced Saturday on CNN.

Having first noticed symptoms about eight years ago while incarcerated for selling drug paraphernalia, Chong said he was diagnosed “about a month ago.” He revealed his condition in an interview about his support for decriminalizing marijuana use and sales.

“I’ve got prostate cancer, and I’m treating it with hemp oil, with cannabis,” he told CNN’s Don Lemon. “So (legalizing marijuana) means a lot more to me than just being able to smoke a joint without being arrested.”

Chong described the cancer “as a slow stage one (that I’ve) had for a long time.” He said that he was drug free for about three years, during which time he began having prostate-related problems.

“So I know it had nothing to do with cannabis,” he said. “Cannabis is a cure.”

He and his on-screen partner Cheech Marin recorded a series of hot-selling comedy albums in the early 1970s, before hitting the big screen in 1978 with “Up in Smoke.” It was the first of several “Cheech and Chong” films chronicling the adventures and misadventures of the stoner pair. The two continue to tour as a comedic act, with shows scheduled for later this month and the fall, according to their official website.

Besides the “Cheech and Chong” films, Chong has appeared in several TV series, such as “That 70’s Show.” He’s authored several books including “The I Chong: Meditations from the Joint” about his “family business” specializing in handmade bongs, arrest and nine months in federal prison, according to his and Marin’s website.

Chong, 74, explained to CNN that he doesn’t smoke marijuana, which he said he’d quit about a year ago “for health reasons,” to treat his prostate cancer. Rather, he said the ingests the hemp oil “at night, so I won’t be woozy all day.”