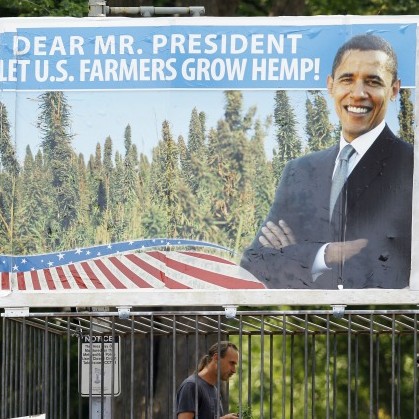 David Bronner, the CEO of Dr. Bronner’s Magic Soaps, began a demonstration Monday inside a large steel cage in front of the White House to protest federal policy that bans U.S. farmers from cultivating industrial hemp.

“The industrial hemp plants I am harvesting and processing into oil cannot produce a high of any kind, but according to the Obama Administration I’m in possession of approximately 10 pounds of marijuana,” Bronner said in a press release.

Even though the hemp plants contain no drug value, industrial hemp is illegal to cultivate in the United States. Bronner is protesting the administration’s conflation of the recreational drug with a plant that has multiple industrial uses. For instance, the oil pressed from hemp seed contains high amounts of the omega-3 fatty acid.

Bronner plans to stay in front of the White House until he finishes harvesting the hemp seed from the plants and pressing the oil, which he hopes to serve on hemp bread to the public.

Bronner is enclosed with the plants and equipment in a locked, steel bar cage to prevent interruption by police until the entire harvesting and pressing process is complete. But as of 10:05 am EST, a police officer threatened to cut off the lock and arrest Bronner from inside.

The same officer has also threatened to charge Bronner with multiple felonies should one of the officers injure themselves while attempting to break into the cage.

There may not be any Shiba Inu puppies, but you can check out the drama unfold below, via UStream:

CTMMP Pre-rolls… They leave a bit to be desired.