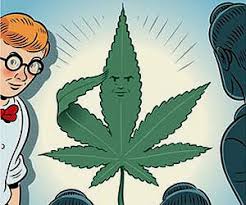 Voters in this presidential battleground state won’t just decide whether to go red or blue this fall but also green — as in marijuana.

Whether to legalize marijuana will be on the Colorado ballot in November. President Barack Obama and presumptive Republican nominee Mitt Romney have identical stances on pot legalization — they oppose it. And neither is comfortable talking about it.

Yet Obama and Romney find themselves unwittingly ensnared in the legalization debate — and both may want to take it more seriously if their race in Colorado is close.

With Colorado politically divided and home to a huge number of independent voters, Obama and Romney are devoting money and manpower to winning its nine electoral votes.

The November ballot question asking Coloradans to legalize marijuana cuts two ways for Obama. It could draw younger voters to the polls, boosting the president and down-ticket Democrats. It also highlights the Obama administration’s conflicting signals on states that buck the federal marijuana ban.

Legalization activists are a small but passionate group, and there are signs that some who turned out in large numbers here to campaign for Obama in 2008 have soured on the president, in no small part because of dismal employment prospects for younger workers.

Obama ran into Colorado’s roiling pot controversy in April, when he spoke at the University of Colorado in Boulder. He received thunderous cheers when he walked on stage, but when he started with an innocuous thanks to the university chancellor, many students booed. That’s because a week before, the chancellor had shut down a large pro-marijuana protest on campus.

On a late-night television interview with Jimmy Fallon that aired the same night, Obama laughed off a question about marijuana legalization. “We’re not going to be legalizing weed — or what — anytime soon,” the president said.

Obama has conceded he used marijuana and cocaine while he was college-age and called their use “bad decisions.” An Obama biography to be published this month from David Maraniss of The Washington Post says Obama used pot in high school too, smoking with basketball buddies in a group that called themselves the “Choom Gang.”

Romney has never smoked pot or used illegal drugs, a campaign spokeswoman said, and he has called marijuana a “gateway drug.” He recently stumbled into the marijuana debate when he visited an oil rig in northeast Colorado and was visibly taken aback when a Denver TV reporter asked him about marijuana.

“Aren’t there issues of significance that you’d like to talk about?” Romney replied, his smile not hiding his annoyance.

Activists say the candidates are wrong to overlook the possible importance of marijuana on Colorado ballots.

“The cannabis supporters that I run into throughout the state are very active, they’re enthused, they want to see change and they’re willing to make it happen. And if I were the president, I’d really want that enthusiasm,” said Boulder lawyer Lenny Frieling, chairman of the Colorado chapter of the National Organization for the Reform of Marijuana Laws.

Frieling is a Democrat who supports Obama and donated to his campaign in 2008. But this time, Frieling says, he’s sending his money to local candidates in Colorado and elsewhere who are firmly in the pro-legalization camp. He says he’ll still vote for Obama — but he’s not giving him more money.

That was a reference to a 2009 letter from Obama’s attorney general stating that federal law enforcement would generally ignore marijuana users who comply with state pot laws. Yet, in 2012 alone, federal authorities have shut down more than 40 Colorado marijuana dispensaries, even though the dispensaries were complying with state and local law.

Another activist who organizes campaigns on local marijuana ballot questions in Colorado, James McVaney of Larkspur, says he and like-minded young activists support Obama but are less willing to volunteer for his campaign this year, focusing their energies on the marijuana initiative instead.

Colorado’s past suggests that in extremely close contests, Democrats could benefit when pot is on the ballot.

In 2006, voters overwhelmingly rejected pot legalization. But in the same election, Democrat Bill Ritter was elected after eight years of Republican rule in the governor’s office, and a couple of narrow victories for Democrats to the state Legislature coincided with areas where pot activists registered dozens of young voters.

Washington and other states may see marijuana legalization on ballots this fall, but no other state considered a presidential battleground is likely to.