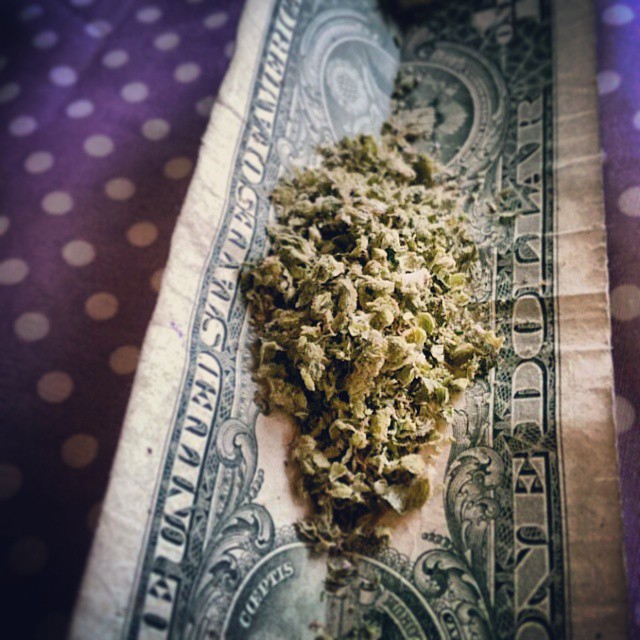 By Andrew Chow, JD at FindLaw.com

A man likely suffering from late-night munchies tried to pay for his meal at a Denny’s restaurant with a $1 bill and a bag of marijuana, police say.

The incident happened about 2 a.m. Saturday in Niagara Falls, N.Y., The Buffalo News reports. The man placed a to-go order for a burger and fries, which rang up to $9.91. When it came time to pay, the man came up short — but then had a pothead epiphany.

The man only had a $1 bill and a bag of weed, so he offered them in exchange for his Denny’s dinner. He must’ve been totally bummed when the cashier turned him down.

Undeterred, the man then turned to his fellow Denny’s diners, trying to sell his bag of pot for cash.

It’s not clear if any patrons took him up on the offer, because the cashier was a total buzz-kill and called the cops. This caused the man to cut short his drug dealing and run off into the woods. He hasn’t been seen or heard from since.

If caught, the man could face charges for possessing and selling marijuana, which could be a misdemeanor or felony under New York law, depending on the quantity of pot in question. (It probably wasn’t much, since the man attempted to barter the bag for a $10 meal.)

As for the man’s failure to pay for his burger and fries, the cashier likely called police to report the man for theft. If the man took a bite out of the burger or took it with him, he may indeed be in trouble. But if he never got a chance to dig in to his dinner, a theft charge — called larceny in New York — may be a stretch, because he never deprived Denny’s of the burger and fries.

The man who tried to pay his Denny’s bill with marijuana may not be able to hide for long: A restaurant employee recognized the man and told police where he lived. Officers didn’t find him at home, but their investigation continues.