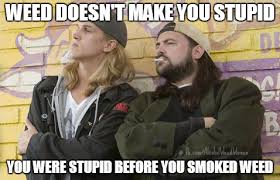 Is marijuana use really stupid?

On May 9, the Hungry Horse News quoted Flathead County commissioner candidate and former Whitefish city councilor Doug Adams saying, “People who think (marijuana) is a good idea for Montana are stupid.” Adams’ name calling against thousands of Montanans shows to me a serious character flaw as a politician — one who should address issues in objective terms, not demean people on subjective terms.

As a former prosecutor and current criminal defense attorney, I have handled hundreds of cases where people consumed alcohol and where people merely possessed marijuana. By far, the effects of alcohol are much worse and pervasive.

The negative consequences of alcohol are incalculable throughout America and Montana — ruined families, hungry children, beaten spouses, lost lives, damaged property, increased insurance premiums, higher taxes, trashed neighborhoods and streets, to name a few. Of all the violent crimes consuming our resources in the justice system, alcohol is the number one cause.

So is alcohol a “good idea for Montana”? American and Montana society determined decades ago that in spite of its direct and collateral harms to society, alcohol is a good idea. It is a multi-billion dollar industry. Much of our economy would not even exist had we not rejected alcohol prohibition, and there is hardly a person in America today who advocates banishing alcohol, presumably including Adams.

Personal preferences are not what should direct state action, especially when it concerns punishing us. Is it also a good idea to punish any “vice” the government determines is not a “good idea for Montana”? Both liberal origins (see John Stuart Mill, “On Liberty”, 1869) and conservative origins (see John Jacques Burlamaqui, “On the Principles of Politic Law”, 1747) confirm that an objective standard is required to maintain a free society.

If there is a real danger of marijuana to society, it is the state and federal governments throwing people in prison and ruining their lives. Who is stupid — people who want our laws to foster freedom and responsibility, or people who use law to enforce their personal preferences of “Victorian” or “Bible-belt” morality on the rest of us?

That is why if I am honored to become the state representative for House District 4 this November, I will work hard to protect all of our rights, use an objective standard relative to government’s role in society, and reduce government’s intrusion when we are harming no one.

Tim Baldwin is the Republican candidate for House District 4.