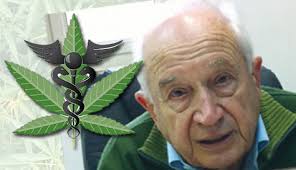 When you think about medical marijuana, or pot in any way, you typically picture Cheech and Chong, not an elderly Yiddish speaking grandfather. However, according to the Jerusalem Post, Rafael Mechoulam, a geriatric research scientist from the Hebrew University in Jerusalem, known as the “Marijauna Maven,” is the go to guy when it comes to issues of medical pot.

As a research scientist in the 1960s, Mechoulam was tasked with cracking pot, determining its active chemical ingredients by the American National Institute of Health (NIH), after the agency received a mandate to look into the drug.

He had initially been told that the United States was not interesting in his research into pot. However, he soon received a call back from the Feds, telling him they wanted to sponsor his research.

“I asked them what had happened,” Mechoulam told the Jerusalem Post, “and it turned out that the son of somebody who was important, a senator or somebody else [like that], had called NIH and asked, what do you know about cannabis? His son had been caught smoking pot and he wanted to know whether his brain was being damaged. They didn’t know anything about it because nobody was doing any research on cannabis in the US.”

After discovering and synthesizing THC, the active ingredient responsible for your high when you toke up, Mechoulam continued his research, eventually becoming known as the world’s foremost expert on pot.

A staunch advocate for medical marijuana use, Mechoulam seems happy with the progress that Israel has made in this field. While every prescription for pot has to be approved by the Ministry of Health in Jerusalem, cannabis use for medicinal purposes is expanding in Israel, where it is legal, if highly regulated.

During an experiment, in which children undergoing chemotherapy for cancer were being given THC extracted from marijuana plants to help with their nausea, he said, one of his colleagues told him that he could no longer, in good conscience, prevent the control group from using pot, as it was just so effective in calming the negative side effects of their treatment.

All this just goes to show that you can’t judge by appearances, and that the elderly man hobbling down the street next to you might just be a little bit coller than you thought.
check out the video here: https://www.youtube.com/watch?v=T26dYtXO9l4&feature=player_embedded