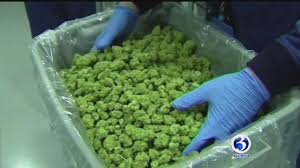 CT, welcome to the club, MASS you are next. – UA

Connecticut lawmakers have decided in favor of legislation that allows for the limited use and distribution of cannabis as medicine.

Members of the Connecticut Senate today voted in favor of HB 5389, the Palliative Use of Marijuana Act. Their vote follows similar approval by the General Assembly. Today’s vote clears the way for Democrat Gov. Dannel Malloy, a supporter of the Act, to sign the bill into law.

Connecticut will become the 17th state since 1996 to allow for the limited legalization of medicinal cannabis. It will be the fourth New England state to do so, joining Maine, Rhode Island, and Vermont.

“Today is a day of hope, compassion and dignity and I thank all of the legislators who worked hard on this legislation and who voted to pass this bill,” said Erik Williams, Executive Director of Connecticut NORML. “I am so happy for all the patients who will have another medicinal option to discuss with their doctor and for all of those currently suffering with debilitating conditions who will no longer suffer the indignity of being sick and a criminal.”

The statewide efforts of Connecticut NORML resulted in tens of thousands of phone calls, emails, patient and legislator meetings, and letters to legislators. “Patients and doctors told their stories and asked legislators to tell them ‘No, you haven’t suffered enough,’” said Williams. “Many others stressed that this bill did medical marijuana the correct way and that Connecticut had an opportunity to be a leader in America on this issue. Our strategy and dedication has obviously paid off.”

The Palliative Use of Marijuana Act mandates the state to license a limited number of producers to cultivate cannabis for therapeutic purposes. Qualified patients under this act would obtain cannabis via licensed pharmacists, which would obtain permits to dispense the substance from the state Department of Consumer Protection.

In addition to the efforts of Connecticut NORML, Students for Sensible Drug Policy (SSDP), the A Better Way Foundation, ACLU, and Law Enforcement Against Prohibition (LEAP) all actively worked to help pass the bill.

The new law, once signed by the Governor, will take effect on October 1, 2012.

Last year, Connecticut NORML took a lead role in the passage of separate statewide legislation that decriminalized the possession of marijuana by adults from a criminal misdemeanor (punishable by one year in jail and a $1,000 fine) to a non-criminal infraction, punishable by a fine, no jail time, and no criminal record.