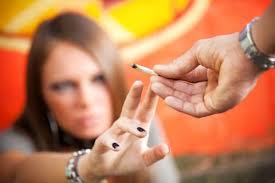 Teen Marijuana Use On The Rise?

May 3, 2012 redorbit.com
American media at its finest….tell us marijuana is the bad drug, and back it up with ZERO scientific data, but treat the 10% steady oxy addiction rate like its an afterthought.  The days of drugfree.org, and private intrest groups like Metlife are starting to look more and more absurd to the people most affected by their rhetoric. -UA

New studies from The Partnership at Drugfree.org and the MetLife Foundation released this week show an increase of marijuana use in today’s teens. Sponsored by the MetLife foundation, The Partnership Attitude Tracking Study shows that more than 1.5 million US teens have smoked weed at least 20 times in the past month.This puts teenage marijuana use up by almost 80% since 2008. This increase marks a three-year trend of teen smoking habits. According to the study, the last time such a significant increase had been noted was in 1998 when past-month use was at 27%.“These findings are deeply disturbing as the increases we’re seeing in heavy, regular marijuana use among high school students can spell real trouble for these teens later on,” said Steve Pasierb, President and CEO of The Partnership at Drugfree.org, in a statement.

“Heavy use of marijuana — particularly beginning in adolescence — brings the risk of serious problems and our data show it is linked to involvement with alcohol and other drugs as well. Kids who begin using drugs or alcohol as teenagers are more likely to struggle with substance use disorders when compared to those who start using after the teenage years.”

The study suggests part of the reason for this increased marijuana use is how “normal” smoking weed has become to today’s teenagers. Only 26% of the teens questioned in the study said marijuana use wasn’t prevalent in their schools. Alternatively, a large majority of teens (71%) said they have friends who use marijuana regularly.

Not only are these teens viewing marijuana use as “normalized behavior,” Pasierb also says parents aren’t taking the issue seriously enough.

“Parents are talking about cocaine and heroin, things that scare them,” said Pasierb. “Parents are not talking about prescription drugs and marijuana. They can’t wink and nod. They need to be stressing the message that this behavior is unhealthy.”

This attitude from the parents may be rubbing off on teenagers.

“We have also seen a considerable decline over the past five years in the proportion of teens seeing great risk associated with marijuana use,” said Johnston.

“The latest findings showing an increase in marijuana use among teens is unsettling and should serve as a wake-up call to everyone in a position to prevent unhealthy behavior,” said Dennis White, President and CEO of MetLife Foundation.

“While it may be difficult to clearly understand just how dangerous marijuana use can be for teens, it is imperative that we all pay attention to the warning signs and intervene anyway we can. Early intervention is critical to helping prevent teens from drug abuse and addiction.”

The Partnership Attitude Tracking Study also found the number of teens abusing prescription and over-the-counter medications to be “unacceptably high,” though there wasn’t a significant increase similar to marijuana use. Teen abuse of drugs such as Vicodin and OxyContin have remained at 10%.