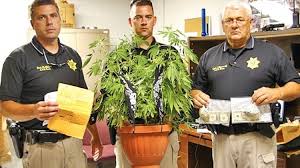 Arrest comes on the heels of announcement he plans to sue county executive, take leave from job

Carl O. Snowden, civil rights chief for the Maryland Attorney General’s Office, was arrested for alleged marijuana possession Friday while he was on probation for a drunken-driving conviction, according to online court records.

He could face 60 days in jail if prosecutors pursue a probation violation charge against him.
The arrest comes on the heels of an announcement that Snowden will temporarily step down from his state position so he can sue the county, which he claims wrongly gathered information about him for political purposes.

Snowden, 58, sent a certified letter on April 10 to County Attorney Jonathan A. Hodgson outlining his intent to sue, as required by law, Cary J. Hansel III, Snowden’s attorney, said in an interview Saturday.

In the suit, Snowden is expected to claim he suffered emotional distress after County Executive John R. Leopold was accused in a criminal indictment of ordering a security detail to compile a dossier about him, the letter said. Snowden’s attorney demanded $20 million to settle the case. That offer stands only until the suit is officially filed, according to the letter.

The lawsuit will probably be filed in two weeks, Hansel said in an earlier interview.

The marijuana arrest was first reported Sunday by Capital Gazette Communications, which noted that the charge came on April 20, or “4/20” — a sort of counterculture holiday for pot enthusiasts. The number 420 has long been associated with marijuana, though its origins are unclear.

Few details of the arrest were immediately available. Police said a copy of the charging statement in the case would not be available until Monday.

In an emailed statement, Hansel said Sunday that another man was in the car with Snowden at the time of his arrest.

“We are confident that Mr. Snowden will not be found guilty,” Hansel wrote. “This is such a small amount that such minimal possession is a minor misdemeanor.”

He did not address the possibility of a probation violation.

Snowden was placed on three years’ probation in early 2011 after being convicted of driving while impaired by alcohol on Route 97 near Farm Road in Anne Arundel County in June 2010. He was given a suspended 60-day sentence, which could be reinstated if he’s found guilty on the marijuana charge. His trial date in that case is set for May 3.

“Carl Snowden has spent a lifetime in the civil rights struggle and this nonissue will not distract him from continuing the fight,” Hansel said in his statement. “The few remaining anti-civil rights stalwarts will seize on this nonissue to attempt to criticize Mr. Snowden and detract from his many accomplishments. Anyone who does so will soon be embarrassed as the facts develop and Mr. Snowden is not found guilty.”

“Anything involving the charges as reported will not be handled in any way by the attorney general’s office,” Paulson said.

The Maryland Attorney General’s Office did not immediately respond to a request for comment about the charges against Snowden or his plans to take a leave of absence to sue Anne Arundel County.

The Maryland state prosecutor charged County Executive Leopold, a Republican, last month with four counts of misconduct in office and one count of misappropriation of county funds. The indictment alleged that Leopold directed his taxpayer-funded security detail to perform personal and political tasks, including compiling dossiers on political enemies. Leopold has said he is innocent of the charges and will fight them in court.

The suit is based on information released by prosecutors in the indictment and statements made before the County Council, said Hansel.

It is being filed now, before the criminal prosecution against Leopold concludes, in order to diminish the time available for evidence to be lost or destroyed, he said. A police official told the County Council that one file of personal information that was gathered has already been shredded, he said.

Lt. Col. Emerson C. Davis, the county’s deputy police chief, who testified before the County Council this month, said he had seen Police Chief Col. James E. Teare Sr. destroy a file on a state employee who had alleged that Leopold sexually harassed her. Davis told the council that he saw no legitimate reason for police to have the file.

Beginning next week, Snowden plans to take a leave from his job in the attorney general’s office so he can “pursue these claims freely without the appearance of conflict,” according to an earlier statementfrom Hansel.

Snowden plans to spend time with his family and travel “with an eye toward furthering his civil rights agenda,” Hansel said.

The notification letter was also sent to the state treasurer, said Hansel, who does not expect the suit will be filed against the state.

Leopold’s spokesman directed inquiries to Hodgson, who said it was premature to discuss the case.

“If and when he files a lawsuit, then we’ll evaluate it at that time,” Hodgson said.