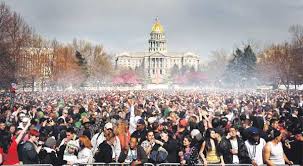 Boulder, Colorado (CNN) — Steps taken to thwart a public marijuana smoking event Friday at the University of Colorado appear to have worked. Protesters who gathered at a quad on the campus for the customary 4:20 light-up time dispersed without an apparent toke.

In past years the Norlin Quad on the campus of the University of Colorado at Boulder had drawn 10,000 to 12,000 people for the event, which falls on April 20 (4/20). Marijuana smokers traditionally wait until 4:20 in the afternoon to light up as a celebration of marijuana culture and a protest against drug policy.

This year, the school closed the campus to outsiders and spread an unpleasant-smelling, fish-based fertilizer on the quad before enclosing it in yellow police tape and stationing police officers around the perimeter.

Hours before the planned event, three students who crossed police lines and went onto the field were led away in plastic handcuffs.

Several hundred students gathered around the quad as the time approached. A man began shouting into the crowd, becoming its de facto leader. When asked his name he replied, “It doesn’t matter.”

The crowd seemed to expect him light up a joint, but instead he dashed under the police tape and ran across the quad as police gave chase on foot.

None of his encouragers followed.

Police ultimately nabbed him and carted him off in plastic handcuffs.

Their leader gone, no one in the crowd seemed to know quite what to do. No one could be seen smoking marijuana and by the less legendary time of 4:30 the crowd had gone on their way.

The number 420 has become synonymous with all things marijuana, but exactly why is less clear.

Whatever the number’s origin, “420” events across the country have become opportunities to advocate the legalization of marijuana. The expansion of medical marijuana in California, Colorado and other states is making efforts to legalize marijuana more mainstream and making more people comfortable coming out and smoking pot in public, according to Chris Conrad, curator of the Oaksterdam Cannabis Museum in Oakland, California.

Boulder’s is one of the biggest pro-pot rallies, and attendance had grown from year to year, according to university spokesman Bronson Hilliard.

“People fly in from around the country to participate,” Hilliard explained. “We don’t understand why they have to come to (this) campus.”

Prior to the Colorado event, university police spokesman Ryan Huff said the smoke-ins have become too dangerous.

“It’s hard to keep track of that many people high on marijuana,” he said.

Why these marijuana advocates congregate each year on April 20 is a bit of a mystery steeped in the hazy lore of the American pot culture. Some have said 420 is a local police code for someone smoking marijuana. Others have said it refers to the number of active chemicals in marijuana.

Conrad said the leading theory traces the beginning of 420 to the early 1970s when a group of students at San Rafael High School in California would meet at 4:20 each afternoon to smoke marijuana.

“It (was) the time between when classes were over and their parents came home,” he said. “The number 420 signifies that somebody is smoking marijuana right now and it becomes a clarion call for others to join.”

According to Conrad, the story goes that the San Rafael teens named themselves “the Waldos” and would meet very day at 4:20 p.m. near a statue of Louis Pasteur to smoke joints.

A website that claims to be associated with the Waldos declares them to be “The Founding Fathers of 420,” although it doesn’t appear to be current. Attempts to reach the owners of the site were unsuccessful.

No matter what the origin, the number now signifies the pro-marijuana culture: Craiglist ads for roommates, or for even so-called “casual encounters,” often note “420 Friendly.” An episode of the animated TV show Family Guy called “420” involves a plot in which marijuana becomes legalized and 420 Magazine is devoted to marijuana culture. The 2003 California State Senate bill that became the law that established medical marijuana in the state was called SB420.

What began is a secret code word between stoners has gone mainstream.

“It’s a form of shorthand essentially. As far as being a secret code, it’s one of the least secret,” explained Conrad with a laugh.