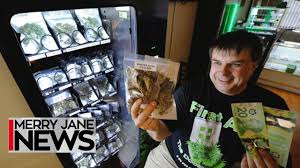 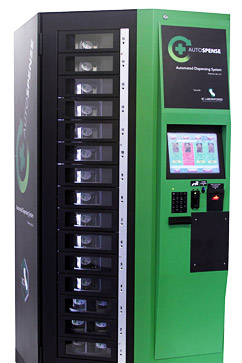 A California company hopes to make medical marijuana a little easier to obtain and to control.

Dispense Labs, a division of  the Dispensary Group, unveiled  Autospense  Friday, an automated dispensary that distributes medical marijuana and looks like a vending machine.

All that is needed to tap an Autospense machine is a registration card and unique PIN number, said Joe DeRobbio, Dispense Labs’ founder and CEO.

After swiping the card, the patient is granted access to a caged,  camera- monitored room. From there,   a patient swipes his or her card again and is given a menu to choose medicinal variety and quantity, DeRobbio said. Payment can be made with cash, credit or debit card. Once payment is received, the door to the machine opens, much like an ATM machine,  to allow patients to remove their medicinal marijuana.

During after hours, Autospense is open only to patients who have agreed to the fingerprint option – they run their prints  through a scanner and swipe a registration card, DeRobbio said.

Autospense offers a secure, “businesslike” way to distribute and obtain medical marijuana,  said DeRobbio. With cameras, locks and sensors, the machines are difficult to break into.

“The facilities are secure,” DeRobbio said. “There are cameras outside and inside. There are alarm sensors around and in the machine. If there’s any type of forced entry, it sets off an alarm.”

And there are consequences for tampering with the system.

“If you’re going to go in and try to rob that machine and do something silly, your membership and access to the machine is revoked permanently,” said DeRobbio.

The machine records all transactions and inventory 24 hours a day and seven days a week while securely managing a patient’s information.

The idea for the machine came when DeRobbio noticed a lack of control regarding medical marijuana. Autospense, which is currently allowed  only  in dispensaries in California and Colorado, is designed to mitigate problems surrounding medical marijuana distribution,  including theft and the black market, DeRobbio said.

“It’s a difficult culture,” DeRobbio said. “This provides a solution. It’s manageable, it’s controllable, and it’s transparent. Taxation comes right from the machine and every dollar is accounted for.”

Although Dispense Labs supplies the machines, it is not involved in growing the product, DeRobbio said.

“We are not associated with the industry,” he said. “We do not provide the medicine that goes in the machine.”

Medicinal marijuana has been legal in California since Proposition 215 was passed in 1996.

DeRobbio believes the Autospense system is the perfect place for medical marijuana in society.

“Medical marijuana, we believe, is here to stay,” DeRobbio said. “Here’s a way that you can control that 800-pound gorilla.”