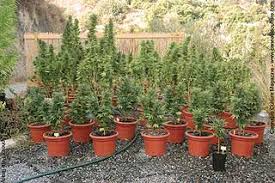 Sixteen years after California voters passed Proposition 215, legalizing medical use of marijuana, it’s clear the plant is not going to disappear.
Now if only the federal government could figure that out.
The message will be exhaled across the West Friday, as pot smokers gather to celebrate their national holiday: 4/20, a number whose origins are veiled in time and rumor, if not in smoke.
President Obama does not hear the message.
At a Summit of the Americas conference in Columbia on April 14, the host nation’s President Juan Manuel Santos discussed alternatives to the “War on Drugs,” and urged consideration of a middle ground short of decriminalization.
In response, Obama said, “I think it is entirely legitimate to have a conversation about whether the laws in place are ones that are doing more harm than good in certain places.” But, he added, “I personally, and my administration’s position is that legalization is not the answer,'” according to The New York Times.
Consider some numbers the War on Drugs has generated:
The annual marijuana crop in California is worth $13.8 billion, according to “Ganjanomics,” an Aug. 15 story in High Country News.
Mexico’s war with drug cartels, backed by $1.6 billion in U.S. money for training, support and equipment, has brought that country 50,000 deaths in 5 years.
If marijuana were legal in the United States, you could grow it in your back yard, bring it to your local farmers’ market to trade or sell, and buy it commercial grade at your corner store or at specialty shops.
Law enforcement could use a device, akin to a breathalyzer, to determine if someone was too high to be driving.
Drug cartels would have less incentive to battle over supply routes marijuana would no longer be expensive.
Unfortunately for California, the Obama administration is making the state it the poster child for what flouting federal drug laws will get you.
Under the Controlled Substances Act marijuana is classified as a Schedule I drug, meaning: “a) The drug or other substance has a high potential for abuse, b) The drug or substance has no currently accepted medical use in the United States.”
But in the rural Northern California counties of the Emerald Triangle, including Mendocino, Trinity and Humboldt Counties, marijuana is what powers their economies.
Tired of dealing with hunters and hikers encountering gun-toting pot growers in its forests, Mendocino County started a first-of-its kind permitting program in 2010 that let medical marijuana collectives grow up to 99 plants, to bring pot growers out of the black market.
Participants paid the county $1,500 in application fees, $50 for zip ties for each plant and $300 to $600 per month for monthly garden inspections by sheriff’s deputies.
Nearly 100 farmers signed up for the program, which generated $663,230 for the Mendocino County Sheriff’s Office from July through December, according to county officials.
That all changed in October, when DEA agents raided Northstone Organics’ owner Matthew Cohen’s Mendocino County farm and cut down his 99 marijuana plants.
Cohen ran a medical marijuana delivery service for patients in the Bay Area and Los Angeles, and appeared on the PBS documentary show “Frontline” earlier in the season, touting his garden’s compliance with county law.
Due to threats from U.S. Attorney Melinda Haag that Mendocino County could face litigation if the program continued, the board of supervisors voted in February to end it.
Mendocino County Sheriff Tom Allman was an advocate of the program.
“This step that the U.S. Attorney’s Office took in California, in my humble opinion as an elected sheriff, was a step backwards,” Allman told KQED News. “We’re further away from a solution today than we were two months ago.”
On April 3 federal agents raided Oaksterdam University, a medical marijuana training college in Oakland, founded by Richard Lee, who spent more than $1 million backing a defeated 2010 California ballot measure that would have legalized recreational marijuana use.
An IRS spokeswoman told reporters that agents were serving a federal search warrant but said she could not comment on the raid’s purpose.
Given the federal government’s position, and the U.S. Supreme Court 2005 ruling in Gonzalez v. Raich, that Congress can criminalize homegrown cannabis production and use even where states approve it for medical purposes, this is a battle that will play out over decades.
What will it take for our nation’s leaders to even start discussing solutions to a problem that will only keep growing?