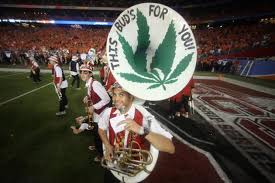 DAYS BEFORE the University of Georgia broke for spring break in March, athletic director Greg McGarity gathered more than 600 athletes and warned them about the consequences of consuming alcohol and illegal drugs.

Not everybody heard him.

Before the end of the month, police had arrested Bulldogs starting cornerback Branden Smith for misdemeanor marijuana possession and, according to multiple reports, All-America safety Bacarri Rambo tested positive for weed. (The school has not confirmed or denied the reports; according to Rambo’s high school coach, he unknowingly ate pot-enhanced brownies.) Under the school’s drug policy, Rambo, whom the school had previously suspended for a rules violation, could face a multigame suspension. Smith, a first-time offender, will miss at least the Sept. 1 opener.

The incidents highlight a trend in college football that has taken hold of the news cycle several times since the beginning of last season.

Most recently, on April 11, former Auburn running back Michael Dyer testified during an ex-teammate’s trial on armed robbery charges that he consistently smoked synthetic marijuana while playing for the Tigers. Dyer was suspended for last season’s bowl game and has transferred to Arkansas State.

In February, four football players were among 17 Texas Christian University students arrested in a campuswide drug sting. Linebacker Tanner Brock, safety Devin Johnson, offensive tackle Ty Horn and defensive tackle D.J. Yendrey are charged with delivering a quarter-ounce to five pounds of marijuana to undercover agents. The Fort Worth Star-Telegram also reported that five TCU players tested positive for marijuana and another 11 had trace amounts within the margin of error after a Feb. 1 test.

In January, police arrested University of Alabama cornerback Dre Kirkpatrick, a passenger in a car containing 7.9 grams of marijuana, 10 days after he helped lead the Crimson Tide to the BCS title. The charges were later dropped, and Kirkpatrick remains a likely first-round pick.

University of Florida defensive tackle Leon Orr was arrested in January on misdemeanor charges of possession of marijuana and drug paraphernalia after university police searched his dorm room. Orr, who accepted deferred prosecution, was the fifth Gators player arrested on pot charges since coach Will Muschamp took over for Urban Meyer in 2011.

“If marijuana infiltrates your program, then everyone is going to do it and you’ve got a huge problem. If you don’t test and do it right, that’s what’s going to happen — because it’s everywhere on college campuses.

College football players smoking marijuana is nothing new. Coaches and administrators have been battling the problem and disciplining players who do so for decades. Still, “I believe it’s becoming more and more frequent on campuses,” says Michigan athletic director Dave Brandon. One Football Bowl Subdivision coach says that athletes of today seem to treat marijuana as players from previous generations treated alcohol and that many of his players prefer smoking pot to drinking because weed leaves no hangover.

NCAA statistics show a bump in the number of stoned athletes. In the NCAA’s latest drug-use survey, conducted in 2009 and released in January, 22.6 percent of athletes admitted to using marijuana in the previous 12 months, a 1.4 percentage point increase over a similar 2005 study. Some 26.7 percent of football players surveyed fessed up, a higher percentage than in any other major sport. (The use of other drugs, such as steroids and amphetamines, has declined or held steady.) A smaller percentage of athletes actually get caught, but those numbers are also on the rise. In the latest available postseason drug-testing results, positive pot tests increased in all three divisions, from 28 in 2008-09 to 71 the following school year.

The NCAA has two drug-testing programs, both of which are administered by the National Center for Drug Free Sport, which also conducts testing in the NFL and NBA. One test is for football bowl games and championship events, such as the Final Four and Frozen Four. Any athlete testing positive for PEDs or recreational drugs in this test faces a mandatory one-year suspension. The other test is conducted year-round but does not screen for marijuana. In total, of the more than 400,000 athletes, about 0.6 percent will be tested for pot by the NCAA. “If they tested for pot at every random test, we’d see more suspensions,” says one FBS compliance officer.

The fact of that matter is that PEDs — which “impact the integrity of the game,” says Mary Wilfert, the NCAA’s associate director of health and safety — remain more of a concern than marijuana. “If anything, marijuana might be a performance detractor,” says Wilfert.

The NCAA expects schools to create drug-deterrent environments with their own testing — when and how frequently is at their discretion. “Most institutions believe that it’s best handled at the institutional level,” Wilfert says.

Alabama coach Nick Saban agrees. “I think if the NCAA did it, it would be just like the NCAA is now,” he says. “They come and test at a bowl game, and if a guy tests positive, he’s suspended for a year and they don’t spend any money on [counseling or rehabilitation].”

Saban, who says his program educates offenders and helps them make better decisions but will ultimately dismiss them if necessary, recalls having a disagreement with NCAA officials about one player who tested positive. “Based on the success we’ve had, I asked them to let us manage the guy in our program, like everybody else,” he says. “I also said, ‘I hope you understand our program is a hell of a lot better than yours because you’re not doing anything to help anyone.'”

Still, every school takes a different approach. When Brandon arrived at Michigan in 2010 after serving as the CEO of Domino’s Pizza for 11 years, he says he was surprised to learn how infrequently the Wolverines were actually tested. “It became apparent to me that we had a lot of student-athletes who were looking at the testing protocol as a game of Russian roulette,” he says. “As long as you weren’t one of the ones that was chosen for testing in a very infrequent cycle, then you had a high likelihood to use drugs, smoke pot and not get caught because you didn’t get tested.”

Brandon instituted a more aggressive drug-testing program, which screens athletes more frequently and punishes offenders more severely. “Student-athletes are going to be no different than other students in getting caught up in marijuana, unless there is clarity around the fact it’s wrong and there are consequences if you do it,” he says.

Wolverines are now suspended for 10 percent of their team’s competitions after the first positive drug test and 33 percent of competitions after a second, and they receive a one-year suspension from all activities after a third positive result. “I think it’s a competitive disadvantage to have a program where there is drug usage as part of the culture,” Brandon says. “I don’t look at it as a competitive disadvantage if we have to suspend a student-athlete from time to time to make a point.”

Saban concurs with the proactive approach. “If it infiltrates your program, then everyone is going to do it and you’ve got a huge problem,” he says. “If you don’t do it right, that’s what’s going to happen — because it’s everywhere on college campuses.”

However, not every coach sees the benefits of a vigilant testing program, as former Florida State coach Bobby Bowden said recently. “I know of a lot of schools, and I don’t want to say something I shouldn’t say — but you don’t have to drug-test,” he says. “If you don’t want your boys to be caught with drugs, don’t drug-test them.”

Indeed, The Magazine‘s survey of more than 60 schools competing in BCS conferences revealed myriad testing protocols and discipline standards for players testing positive for marijuana and other recreational drugs. One coach at an FBS school admits that when he was an assistant at a previous school, only half of the team’s players were ever tested. “And they never tested the guys we knew were smoking,” he says.

Not that a single failed test would necessarily jeopardize the athlete’s eligibility. Athletes at schools such as Ole Miss, Purdue and UCLA don’t face mandatory suspensions until they fail three tests. Fewer than 10 schools surveyed, including Georgia, Miami, Michigan, Mississippi State and Virginia Tech, penalize players with mandatory suspensions from play after their first positive test.

Some coaches even oversee their team’s testing, although most schools put assistant athletic directors or sports medicine officials in charge of the protocols. “To be honest, I’m glad it’s out of my hands,” says an SEC coach. “If my team is making a championship run and one of my guys gets popped, I don’t want my integrity tested.”

Like the college sports model itself, testing programs are convoluted and full of loopholes, with schools not required to notify the NCAA of failed tests and mandated to follow only the protocols of their own bylaws. And with so much at stake when it comes to wins and losses, some coaches and schools aren’t willing to put too much on the line by taking drug testing for marijuana seriously. “At the end of the day,” McGarity of Georgia said recently, “I think it comes down to accountability for student-athletes.”

Which explains why the haze lingers.