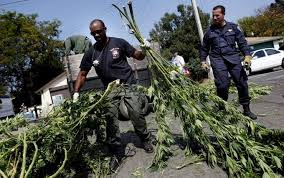 Are Medical Marijuana Raids the Price We Must Pay for National Health Care?

While federal agents were raiding a medical marijuana dispensary and the nation’s first pot trade school in Oakland, run by one of California’s most prominent legalization advocates, less than a mile a way, a gunman was murdering seven people at a Christian nursing school. The feds couldn’t have predicted the rampage, but it’s hard to imagine a starker illustration of misplaced law enforcement priorities.

In an ironic twist, the legal precedent that allows federal raids on state-permitted medical marijuana providers may be the key ruling that will enable President Obama’s health care plan to survive the Supreme Court. The government has repeatedly cited the case in its briefs and in oral argument: Gonzales v. Raich, a 6-to-3 ruling in 2005 that resulted in some odd ideological pairings.

The case began in the early 2000s, when Angel Raich, a medical marijuana patient — along with another patient and two marijuana growers who supplied them — sued the federal government for enforcing the Controlled Substances Act (CSA), which makes marijuana illegal. Raich claimed that since California had legalized the medical use of marijuana, enforcement of the CSA against patients and caregivers was unconstitutional.

The plaintiffs’ reasoning was that the federal government, under the Commerce Clause, is limited to regulating only activities that affect interstate commerce. Since Raich was using marijuana to treat her own medical condition and her grower was providing it to her and not selling it outside of California, her attorneys argued that this had no effect on interstate commerce.

The Court disagreed. Although some of the Justices recognized that there could be good scientific reasons to reconsider the federal ban on the medical use of cannabis, they ruled narrowly on the commerce question. Voting 6-to-3, the Court determined that enforcing a ban on medical marijuana was an appropriate use of federal power.

Justices William Rehnquist and Sandra Day O’Connor dissented, saying that the states have a right to experiment with different policies and that allowing personal medical marijuana use was an acceptable policy. Justice Clarence Thomas also dissented, though his opinion read like it could have been a ruling on Obamacare:

Certainly no evidence from the founding suggests that “commerce” included the mere possession of a good or some personal activity that did not involve trade or exchange for value.

Of course, Thomas is unlikely to support the Affordable Care Act for many reasons. But it’s hard to fathom how the rest of the Court will be able to make the case that it’s O.K. for the federal government to stop medical marijuana use within a state because the drug can easily be sold out of state, but not to require people to buy health insurance, which affects insurance markets and health care prices across the country.

There is a complication, however, when drug-related precedents are invoked. Americans have repeatedly accepted invasions of privacy, violations of dignity, and loss of rights and liberty on account of drugs — violations they don’t tolerate with other issues — in what Thurgood Marshall called the “drug war exception to the Constitution.” But it’s always tricky to predict to which circumstances this “exception” will apply.

As the Court weighs the various legal issues around the Affordable Care Act, dispensary raids have stirred outrage among those who rely on marijuana for pain relief and other medical issues. Even politicians are speaking out against the senselessness of using limited law enforcement resources to raid businesses that are legal under state law — and are also a rare bright spot in a shaky economy — while cutting funding for schools and ignoring white collar crime.

The shame here is that a sane country would not find itself in the position of defending useless raids on harmless people in order to justify a complex compromise to provide universal healthcare.

Get out and vote, Massachusetts!