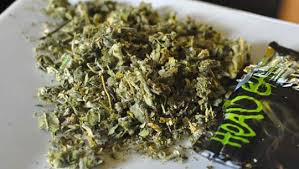 As Sen. Chuck Schumer and other pols push for ban, multimillion-dollar market rolls along

Rick Broider, president of the North American Herbal Incense Trade Association, refused to divulge New York-area members of his group because “everyone involved in this is subject to witch hunts and false accusations.”

If there was any doubt that “fake weed” is big business, meet Rick Broider.

He is the president of the North American Herbal Incense Trade Association, which he says represents 1,200 members in a multimillion-dollar business.

His website keepitlegal.org keeps manufacturers, retailers and consumers abreast of which states have drafted or passed bans against many of the synthetic chemicals used in the product.

New York joined that group last week after a Daily News investigation revealed a growing number of young people are being sickened by the readily available designer drug.

Broider, who has 20 acres in New Hampshire where he makes his own herbal blend, argues the bans are shortsighted.

“These broad prohibitive bills and laws have effectively destroyed the right for herbal incense manufacturers and retailers to create jobs and taxable revenue in their states,” he said.

He refused to divulge the names of New York City manufacturers who are part of his trade group.

“We would love to be clear and transparent, unfortunately all of our members and everyone involved in this is subject to witch hunts and false accusations,” said the 39-year-old father of six.

Many of the manufacturers operate in the shadows — keeping company names off packages and phone numbers off websites.

But the marketing of synthetic marijuana can be sophisticated.

City convenience store owners get visits by salesmen — the Willy Lomans of weed. — hawking their lines of crushed leaves.

“For the last six months, a man has been coming the first of every month with a big book to show me all the products,” said Driss Fadrany, owner of “88,” a deli on the upper West Side.

“They say it’s legal — just incense — and that I can make a lot of money with it. It looks like marijuana to me. I won’t sell it.”

The products, sold under names such as “Dead Man Walking” and “Happy Hour,” contain synthentic cannabinoids that mimic THC, the key psychoactive ingredient in marijuana.

“All these people who are hawking this stuff are interested in is making a buck,” said DEA Special Agent Jim Burns, who covers New York.

“They are not interested in what happens to the people who use it.”

“It’s supposed to be for aromatherapy,” said Anastasia Mouratova, who runs the warehouse for Pricebidz, an herbal incense company based in Brooklyn.

“We just sell it as incense. All our ingredients are legal. To each his own.”

UN Warns of Unprecedented Surge in Synthetic Drug Use Worldwide