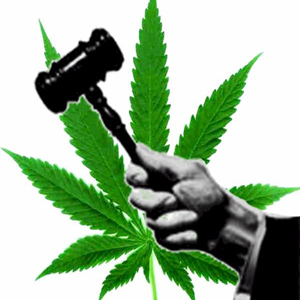 OAKLAND, Calif. (CN) – Three Bay Area medical marijuana dispensaries, a landlord and a patient can’t stop the federal government from prosecuting them, a federal judge ruled. Citing federal laws and precedent, the judge said the plaintiffs face an “insurmountable challenge” in showing that patients will be harmed by the federal crackdown.
The Marin Alliance for Medical Marijuana, MediThrive and The Divinity Tree sought a temporary restraining order to prevent federal authorities from prosecuting marijuana growers and providers.
In a 27-page order on Monday, U.S. District Judge Saundra Brown Armstrong noted the “tension that exists between federal and California laws governing marijuana use.”
The California Compassionate Use Act allows state residents to use medical marijuana, but the plant is a Schedule I controlled substance under federal law.
In September, U.S. attorneys in California announced their intention to shut down medical marijuana dispensaries and prosecute the businesses, their landlords and patients.
The plaintiffs received letters notifying them they were subject to “criminal prosecution, imprisonment, fines, and forfeiture of assets, including the real property on which the dispensary is operating” unless they shut down within 45 days.
In response, the plaintiffs sought a restraining order that would prevent the U.S. attorney for Northern California from prosecuting or seeking forfeitures from marijuana growers and providers.
They also sought a declaration that enforcement of the Controlled Substances Act unconstitutionally “prevents plaintiffs and similarly situated individuals from obtaining medical marijuana with a doctor’s recommendation.”
But Judge Armstrong said the plaintiffs were unlikely to prevail, based on the record from the 9th Circuit and the U.S. Supreme Court.
Citing the Supreme Court ruling in Gonzalez v. Raich, Armstrong noted that the “plaintiffs’ purported fundamental right conspicuously omits any reference to ‘marijuana.’
In Raich, the plaintiff claimed she had a “fundamental right” to “make life-shaping medical decisions that are necessary to preserve the integrity of her body, avoid intolerable physical pain, and preserve her life.”
Judge Armstrong rejected this argument.
“Although the number of jurisdictions that have medical marijuana laws has increased by six, the fact remains that the majority of states do not recognize the right to use marijuana for medicinal purposes,” Armstrong wrote.
“Moreover, as to those states that have not legalized medical marijuana, there is no allegation or evidence of a pattern of non-enforcement of laws proscribing its use. Finally – and significantly – it is difficult to reconcile the purported existence of a fundamental right to use marijuana for medical reasons with Congress’ pronouncement that ‘for purposes of the [CSA], marijuana has no currently accepted medical use at all.'” (Brackets in complaint.)
Because the Supreme Court has held that courts cannot consider the efficacy of medical marijuana as a basis to challenge enforcement of federal drug laws, Armstrong said the plaintiffs face an “insurmountable challenge.