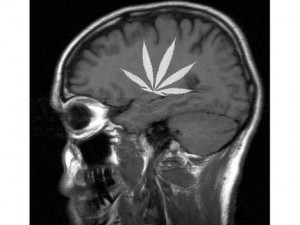 Researchers have discovered a new way to boost the effects of anandamide — a natural chemical in the body that provides pain relief similar to marijuana.

Anandamide has been called the ‘bliss molecule’ for its similarities to the active ingredient in marijuana. As part of the body’s endocannabinoid system, this neurotransmitter has been shown in studies to offer analgesic, antianxiety and antidepressant effects. It also plays a role in regulating food consumption.

In the study, led by Daniele Piomelli, researchers identified an “escort” protein in brain cells that transports anandamide to sites within the cell where it is broken down by enzymes. They discovered that anandamide’s potency is increased when this protein, called FLAT, is blocked.

Previous work by the researchers suggests that compounds boosting anandamide’s natural abilities could form the basis of pain medications without the side effects of sedation, addiction or other central nervous system problems common with existing painkillers, such as opiates.

“These findings raise hope that the analgesic properties of marijuana can be harnessed for new, safe drugs,” said Piomelli, a professor of pharmacology. “Specific drug compounds we are creating that amplify the actions of natural, marijuana-like chemicals are showing great promise.”

For the study, Piomelli and his colleagues used computational methods to study how FLAT binds with anandamide and escorts it to cell sites to be degraded by fatty acid amide hydrolase (FAAH) enzymes.  Blocking FAAH activity increases several effects of anandamide without triggering the “high” of marijuana.

Specific types of pain that could be helped by this discovery could include pain caused by damage to the central nervous system. It is also thought that it might help people break addiction to drugs such as nicotine and cocaine.

The study appears in the online version of Nature Neuroscience.