– Come on Sam you know you want to! 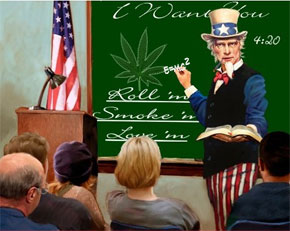 According a recent CBS News poll conducted at the end of October, a slim majority of 51 percent continues to think that marijuana use should be illegal. But support for specifically allowing doctors to prescribe marijuana for serious medical conditions – or legalized “medical” marijuana – is far stronger: 77 percent Americans think it should be allowed.

Still, even though most Americans support this, just three in 10 believe that the marijuana currently being bought in this country under state-authorized medical marijuana programs is being used in the way it has been authorized: for alleviating suffering from serious medical conditions.

A recent CBS News Poll conducted nationwide finds 40 percent of Americans think the use of marijuana should be legal, while 51 percent think it should not. The percentage that favors legalizing marijuana use has been steady for the past two years, but it is larger than it was when CBS News first asked the question back in 1979.

Not all demographic groups view this issue the same, however:

While a slight majority of Americans oppose the idea of legalizing marijuana in general, more than three in four think that doctors should be allowed to prescribe small amounts of marijuana for patients suffering from serious illnesses – the conditions for use that are set up in all of the states that have legalized medical marijuana programs. Support for this cuts across age, gender, region, and political affiliation.