Some judges allow it, some don’t 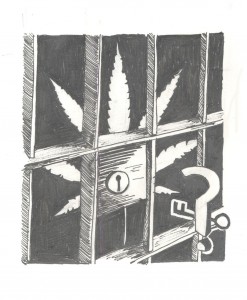 SANTA FE (KRQE) – It’s a question that may not have occurred to those who designed New Mexico’s medical marijuana program: What happens when doctors prescribe the drug to convicted felons on probation?

The answer, as it turns out, depends on which state District Court judge is supervising the probation.

Convicted felons generally are not allowed to use illegal drugs or alcohol while they serve out their probation sentences. They are often regularly drug-tested to make sure they toe the line.

But consider the case of Daniel Borrego. His criminal history includes convictions for armed robbery, aggravated burglary and conspiracy, and he even participated in a July 2009 Albuquerque home invasion in which a 21-year-old man was shot dead.

On Oct. 7, Borrego appeared before Santa Fe District Judge Michael Vigil, presented his medical marijuana card and asked the judge to allow him to use the drug. Vigil discussed the issue quietly at his bench with the lawyers involved in the case.

“I don’t necessarily want to talk about it openly in front of all these people because they’ll go out and get the marijuana cards and have everyone doing marijuana,” the judge told the lawyers at the hearing.

Borrego’s medical history is protected by law, so the reason why a doctor prescribed him marijuana is unknown. But despite any concerns he might have had, Vigil allowed Borrego to continue to smoke marijuana.

“If the doctor prescribes the medication and feels it’s medically necessary, I don’t feel I can interfere with that doctor-patient relationship,” Vigil later told News 13.

The judge said that since the program began in 2007, he’s allowed a total of four defendants to continue smoking medical marijuana.

However, the father of 21-year-old Kerry Lewis – who was killed in the home invasion – is outraged about the Borrego ruling.

“Utter astonishment,” said Ken Lewis when asked his reaction to the judge’s ruling. “I cannot believe someone who is in a home invasion, looking for drugs, is allowed to smoke marijuana.”

But Judge Stephen Pfeffer – whose courtroom is right next door to Vigil’s – has a different take on the situation. Since 2007, Pfeffer said he’s denied three defendants who’ve asked to be able to smoke pot while on probation.

“I have to be concerned with the safety of the community,” Pfeffer told News 13.

Pfeffer’s most recent denial occurred Oct. 31, when David Jimenez appeared in his court. Jimenez is on probation for his fourth driving while intoxicated charge, and his lawyer told the judge his client had recently been diagnosed with cancer. But even that was not enough to convince Pfeffer.

“(A defendant) facing those charges, or sentence for that matter, has already proven that he or she is incapable of having alcohol or other intoxicants and getting into an automobile,” Pfeffer said.

Still, both judges said they don’t have a hard and fast rule about medicinal marijuana and will consider each case individually.

And the problem isn’t only happening in Santa Fe.

On Oct. 31, Bernalillo County sheriff’s deputies raided Joe Baca’s home in southwest Albuquerque. Baca, 27, had been diagnosed with post-traumatic stress syndrome and had a state-issued license allowing him to grow and smoke marijuana. Court records indicate that a District Court judge in Albuquerque allowed Baca to use marijuana while on probation for pleading no contest to shooting at a building and aggravated assault with a deadly weapon.

However, deputies found 22 pounds of pot, 13 plants and $10,000 in cash in Baca’s home, and charged him with possession with intent to distribute the drug.

News 13 left several messages for District Judge Ted Baca – the presiding judge of the 2nd Judicial District in Albuquerque – asking if probationers with medical marijuana cards has been a recurring problem in the district. Baca did not return the messages.

The New Mexico Health Department is in charge of administering the state’s medical marijuana program. Cabinet Secretary Catherine Torres said officials do not ask about a patient’s criminal background.

“It’s not about caring about their background,” Torres said. “It’s called HIPAA and they’re treated as patients.

HIPAA stands for the Health Insurance Portability and Accountability Act, and, among other things, it requires a patient’s health information to be kept confidential.

Torres said most law enforcement officers notify her office when a medical marijuana card carrier violates drug laws, though that is not required. She said her legal team will sit down soon with judges in the state to review the program.

Ken Lewis said that review can’t come soon enough. He said he supports the medical marijuana program in some cases, but believes the wrong people are legally getting high.

“It’s a mockery,” he said. “It’s a total mockery of what the marijuana law is passed for.”

News 13 also asked how jails and prisons handle inmates who might have medical marijuana cards. A spokeswoman for the state Corrections Department said the

department wouldn’t allow it. The jail director at the Santa Fe County jail also said it wouldn’t be allowed.

A spokesperson for the Metropolitan Detention Center said officials there would work to have the inmate released on probation and with an ankle monitor.