Sea-Tac TSA Agents: You Are Free to Bring Medical Marijuana Aboard 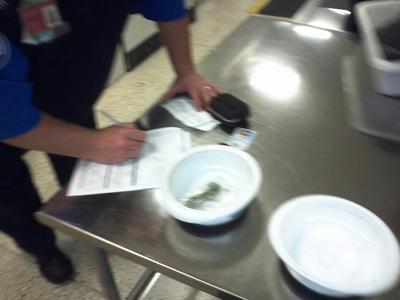 With all the hate typically directed at airport TSA agents, it’s nice to feature some news about our local breed over at Sea-Tac Airport.

When going through security at Sea-Tac airport just south of Seattle Friday morning at about 10:15, Mike put about two grams of cannabis in the scanner bowl in the TSA line.”They grabbed it,” Mike’s friend Todd Dearinger told Toke of the Town. “After a few minutes with the feds and locals they gave him back his meds and let him go on his way.”

Schaef posted this photo of the agent documenting his pot on Facebook.

Elliott checked with Sea-Tac spokesperson Charla Scaggs on the airport’s official policy for prescribed pot coming through security. He said “I don’t see a problem, as long as they have a doctor’s authorization.”

Airports like those in San Francisco and Oakland have been previously noted as being cool with medical-marijuana being taken aboard. Other airports, however, have taken a different approach, like this incident in Indianapolis where a cancer patient’s medical cannabis was confiscated and destroyed.

The ambiguity is more than a little odd, considering the TSA is a federal agency and according to the federal government, all cannabis–medical or otherwise–is as illegal to posses as heroin.

Apparently the TSA got the memo that the DEA did not.