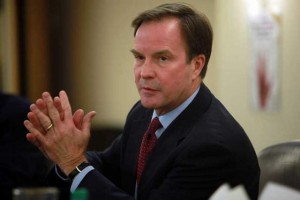 If there’s anything Bill Schuette has established in his first year as Michigan’s attorney general — besides an appetite for media attention rivaling that of Sarah Palin or Geoffrey Fieger — it’s that he won’t stand for the federal government to trample on the rights of the people of Michigan.

Unless, or course, the right in question is one that Michigan’s top law enforcement official never cared for in the first place. In which case any pretext for ignoring, circumventing or violating the state law that guarantees it is welcome.

I speak, of course, of Schuette’s maniacal campaign to single-handedly repeal the Medical Marijuana Act that Michigan voters adopted in 2008 — by a considerably wider margin (63%-37%), it should be noted, than Schuette enjoyed in his own victory (53%-42%) over a weak Democratic opponent two years later.

Since then, virtually everyone affected by the MMA — police, state and federal prosecutors, medical marijuana users and prescribing physicians — has come to understand that the law as written is seriously flawed and requires a legislative overhaul to spell out more clearly the rights and responsibilities of all involved.

State lawmakers in Lansing are already at work on such an overhaul. And that’s good for everyone — as long as legislators keep in mind the objective Michigan voters embraced in 2008, which was to authorize the therapeutic use of marijuana by patients suffering from certain medical conditions or symptoms.

Schuette stands proudly among the minority of Michiganders who opposed the MMA and continue to lobby for its repeal. Nothing wrong with that.

But the AG has also exploited his office to target medical marijuana users and providers — precisely the people Michigan voters sought to protect from criminal prosecution when they adopted the MMA. That’s a flagrant abuse of authority — one that undermines respect for the law in general, not just the statute Schuette seeks to subvert.

In his latest initiative, Schuette has opined that police have a legal obligation not to return pot seized from licensed medical marijuana patients because possession of marijuana is still prohibited under federal law. (Never mind that the U.S. Justice Department, which has bigger fish to fry, especially in Detroit, has made clear its lack of interest in prosecuting patients in Michigan and other states that have authorized medical marijuana.)

In fact, the AG warned in an opinion issued late last week, officers who return illegally confiscated marijuana (in seeming compliance with a provision of the MMA that specifically bars its seizure from medical users licensed by the state) are themselves risking criminal prosecution as drug dealers.

Really? And what sort of prosecutor would file charges against a police officer for that? Even Schuette isn’t that deranged.

Schuette’s respect for the superiority of federal law, you may be assured, is entirely situational. When the federal law in question is one he opposes — such as the American Health Care Act of 2009, or EPA rules designed to limit air pollution — he has been in the vanguard of Republican attorneys general suing to stop it. He’s been a ranking member of the executive branch — that’s the one that was established to enforce the law, not to write it — for almost a year, but he can’t stop acting like a legislator.

I have no dog in the MMA fight. I don’t use marijuana, medically or recreationally. And I share the skepticism of those who worry that the MMA, which depends on a black-market distribution network that bears no resemblance to the one used to distribute every other prescription drug authorized by law, is problematic in its current form.

But more than 3 million Michigan residents have made it clear they want licensed patients to be able to use marijuana for medicinal purposes. That’s almost twice as many as voted for Schuette in 2010.

So Schuette’s campaign to emasculate the MMA isn’t just unprincipled; it’s an affront to democratic rule — and to the rule of law he took an oath to uphold.