Marshall Frank: Marijuana dangerous, not worth the risk of using — regardless, it’s time to legalize it 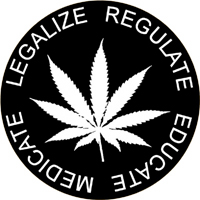 Attention, young people: Don’t let the rhetoric fool you. Marijuana is absolutely a dangerous drug and should not be used for recreation. Those who think they are immune from long-range negative effects are doomed to suffer them.

Here’s what we know for sure:

Getting high often results in lost control of senses or behavior, which can lead to hospitals, jails and broken hearts.

As long as it’s illegal, you can be arrested and struggle with a police record for life for a dumb mistake made at 18.

Users will automatically be exempt from many future government-related and other job opportunities.

Studies have determined that regular use will ultimately impair learning and memory skills. Those same studies show that marijuana inhibits ambition and initiative to improve life.

The powerful strength of street marijuana today drives many users to try stronger drugs, which leads to addiction.

Is the risk worth the gamble?

Most youngsters begin their marijuana journey because of peer influence or family use. Kids want to be accepted by other kids and will make bad decisions for no other reason than to fit it.

Parents and role models who openly use marijuana, or minimize its dangers, are — de facto — turning their kids on to drugs. “Hey, Mom and Dad use it, can’t be so bad.”

I am personally close to one tragic case whereby a single mom used marijuana in the 1970s and thought it prudent to offer her 12-year-old son a joint, saying, “Here, light up. Don’t do this behind my back.” That kid is a 51-year-old, hard-core drug addict today.

Here’s the flip side of the coin: Marijuana should be decriminalized, controlled and taxed, much the same as alcohol. Illegality of pot has had little or no deterrent on its usage, and we waste billions of taxpayer dollars trying to enforce unenforceable laws. A recent national survey showed that 17 million Americans — mostly teens and young adults — used pot in 2010. About 1 million are arrested each year for possessing pot, senselessly jamming court dockets.

Prohibition is a classic example of the failure OF dumb laws intended to control social behavior. Crime rates soared when Prohibition was enacted, and dropped dramatically when the law was repealed. Our 40-year war on drugs is costing taxpayers multibillions of dollars a year in a losing cause, not to mention the waste of human lives in prisons, emergency rooms and morgues.

Money saved from decriminalization can be reapportioned into education, prevention and treatment programs. A 2005 study by a Harvard economist showed that legalizing would result in a net of $14 billion a year in savings and revenue.

Lawmakers know these facts to be true, but politics come first. Showing any trend toward decriminalizing pot will portray themselves as “soft on crime.” A better-educated electorate must influence lawmakers to do what is right.

According to the latest Gallup Poll, 50 percent of Americans think marijuana should be legalized. It’s time to make a change.