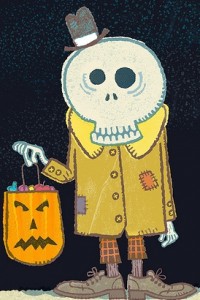 From the department of incipient urban legends comes a press release from the L.A. County Sheriff, warning that officers have seized medical marijuana products “packaged to resemble licensed commercial candy and snacks” and that some tricksters may try to sneak them into youngsters’ Halloween candy.

But like earlier warnings about razors in apples and other poisoned candy, there’s no evidence that any such misdeed has ever occurred. Think about it for a moment: why would a presumed drug user or dealer waste expensive and often difficult to acquire drugs on children?

Marijuana brownies are being sold for $9 apiece, or $75 for 10, at a San Francisco dispensary, for example. A Colorado group reported selling them recently for $8 apiece. Compare that with the average cost of ordinary candy — several cents per piece. With folks typically giving out not more than $1 worth of loot per trick-or-treater, adding pot-laden snacks to the mix would rapidly make for one expensive trick in the Great Recession!

The L.A. Sheriff had also warned about this possibility last year, with no reports of any actual child victims.

The invaluable urban legend debunking site, Snopes.com, reports that in the decades since threats of Halloween poisoners have busied police P.R. departments, no random candy poisonings have ever taken place.

According to Snopes, one sick father did poison his son on Halloween in 1974 with a cyanide-laced pixie stick, in hopes of claiming life-insurance money. He tried to make it look like the 8-year-old was the victim of an anonymous poisoner, by giving the toxic candy to several other children as well (thankfully, they didn’t eat it). But this crime was enabled by the existence of the legend, rather than being its inspiration.

In 2000, one group of trick-or-treaters in Hercules, Calif., near San Francisco, did in fact wind up with marijuana rather than candy — but that was purely by accident. Apparently, a drug dealer had tried to disguise some buds in mini Snickers bar packages and put them in the mail. The parcel somehow got mislaid and wound up at the dead letter office. After the time to claim the box had expired, a postal employee brought it home, and thinking the Snickers packs contained actual candy, innocently handed them out to children on Halloween. That “trick” nearly landed him in jail, but police corroborated his story.

Fortunately, most Halloween horror stories — and tales about pushers giving drugs to unsuspecting children — are fiction. And, no, dealers don’t tempt grade-schoolers with “fake tattoos” or cartoon stamps with LSD on them, either.