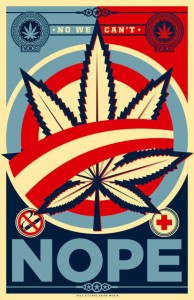 The new federal crackdown on medical marijuana announced on October 7 by four California U.S. Attorneys sent chills throughout the industry. It was a stunning reversal by the Obama administration.

Only two years ago, Deputy U.S. Attorney General David Ogden wrote his landmark “Ogden Memo,” announcing the feds wouldn’t bother businesses in compliance with their own state laws. It proved a dose of Miracle-Gro to California, where pot-selling stores have multiplied since voters approved the state’s 1996 medical-marijuana law. By late last year, California reportedly had more dispensaries than Starbucks.

Colorado also made it legal in 2000, seeing a similar explosion of new storefronts. The same thing happened to varying degrees in 16 other states, from Arizona to our very own Washington.

But the feds’ tolerance wasn’t quite what it seemed. While legal weed grew to an estimated $10 to $100 billion industry—no one’s quite sure of the exact figure—activists noticed an alarming undercurrent to the rhetoric: Raids on growers and dispensaries actually increased under Obama.

As hundreds of thousands of state-approved, doctor-recommended patients happily bought their medicine in well-lit stores from knowledgeable “budtenders,” the ire of cops and prohibitionists rose.

The first sign of Obama’s subterfuge came in late 2010, as California prepared to vote on a ballot proposition that would have legalized growing and possessing small amounts of marijuana for anyone over the age of 21 (Washington has a similar hopeful for the 2012 ballot). Under pressure from teetotalers—nine former Drug Enforcement Agency chiefs begged Obama to oppose the measure—Attorney General Eric Holder said that it didn’t matter what Californians thought. The feds would continue to bust people regardless of the election.

The measure got 46 percent of the vote—not enough to pass. Yet the medical side of things kept going strong. Too strong for Obama.

When the Oakland City Council prepared to authorize large-scale cultivation centers, Melinda Haag, the U.S. Attorney for California’s Northern District, issued the first of a series of letters from her fellow attorneys. She reminded residents that marijuana was still criminalized under federal law, considered equal to heroin or meth, irrespective of its medicinal value.

Nor did she care what California law said. Her “core priority” would be to prosecute “business enterprises that unlawfully market and sell marijuana” under federal law.

Over the next few months, U.S. attorneys from Maine to Washington wrote their own increasingly menacing letters. In Washington, the feds even threatened to arrest state workers who helped facilitate the industry.

Then the Obama administration released a new letter to “clarify” Ogden’s memo. Deputy U.S. Attorney General James Cole verified the about-face: The only people safe from arrest were the “seriously ill” patients and their caregivers.

Everyone else? Be forewarned.

The letter didn’t just target those directly involved in the trade. Cole was also threatening supporting industries—read: banks—with money-laundering charges for dealing in the proceeds from marijuana. Obama had launched a full-on attack on the industries essential to any functioning enterprise.

Banks responded by canceling their weed-related accounts. “Perhaps there may be a few financial institutions here or there that are still accepting accounts,” says Caroline Joy, a spokeswoman for the Colorado Bankers Association. “Those facilities don’t want to reveal who they are.”

Then came a one-two punch.

On October 5, the IRS ruled that one of the largest California dispensaries, Harborside Health Center, owed $2.5 million in taxes because federal law precluded standard deductions for businesses engaging in illegal activity.

In other words, Obama was not only blowing off state laws. He was declaring that legal businesses were now nothing more than criminal rackets. And he was taking away every tool they needed to function.

Harborside’s owner said he’d go out of business if the IRS didn’t reverse course. Dispensaries nationwide saw it as a crippling decision.

Then came another blow two days later—the bombshell dropped by California’s four U.S. Attorneys. They were now going after people who leased stores and land to the pot industry. Violators were given 45 days to close doors, uproot plants, and kick out renters. The penalty for not acting: seizure of property and arrest.

Laura Duffy, the U.S attorney for California’s Southern District, went so far as to threaten media with prosecution for accepting pot advertising (as this paper does).

There was no doubt about it: Obama was intent on killing an entire industry—in the middle of a depression, no less. Left unexplained was why, especially since he was giving the finger to voters in 16 states just a year before he would face them in his own election.

Democratic strategists were perplexed. Roger Salazar, a California party consultant, believes the president may be trying to reach out to a broader base. But that doesn’t explain the attack on his own; Democrats support medical marijuana most. It doesn’t even make sense in luring conservatives. With the country in economic tatters, no one has weed high on their radar.

Except one group, says Salazar: “It’s a mystery, I think, it really is, where the pressure is coming from. My sense is it’s coming from law enforcement.”

Certainly Obama’s threats are real. He may be loath to jail landlords, bankers, or even dispensary owners. Arresting nonviolent, state-sanctioned businesspeople wouldn’t be popular. But his quieter war of chopping merchants off at the knees through credit and leasing would ravage the trade.

Still, the president has thrown himself into an uphill fight. There is reason to believe medical marijuana will persist, despite his betrayal.

The truth will prevail

Ignorance, false propaganda, and rank political posturing tend to be the foundation of the anti-marijuana argument. (Throw in bureaucratic turf protection as well. The DEA, for example, would need fewer agents if pot was decriminalized nationwide.)

A new Gallup poll shows that a record 50 percent of Americans believe marijuana—and not just the medical kind—should be legalized. The poll follows a continuing trend over the past several years of increasing support for legalization.

Obama has chosen to swim against the tide. But there’s reason to believe his fight is about politics, not public safety. If this were about safety, alcohol, not marijuana, whose effectiveness as a medicine has been well-documented, would be his primary target.

Politics make both sides fudge the truth. Yet prohibitionists and the government have been particularly egregious. The government is using taxpayer dollars to prop up its side, with the U.S. Justice Department’s 64-page booklet, “Speaking Out About Drug Legalization,” a prime example.

The booklet, distributed in print and online, states that “smoked marijuana is not scientifically approved medicine.” Forget that by labeling it a drug on par with heroin, the DEA is curtailing the proper study of marijuana, since it prevents even scientists from possessing it for research. The publicly funded propaganda also flies in the face of the opinions of doctors who see pot’s potential as medicine.

It’s a strategy that’s trickled to states with functionaries unhappy about executing the voters’ will. Last December in Arizona, Will Humble, the state’s Department of Health Services director, held a press conference on the state’s new Medical Marijuana Act. He took a moment to remind reporters that more than 1,000 Arizonans died last year from accidental overdoses from prescription drugs.

But when asked how many of those died from marijuana, Humble refused to answer—to chuckles from the audience. He referred the question to his chief medical officer, Laura Nelson, who would only say she’d “have to do the research on that” before she could answer. Then Nelson began stammering about the danger of marijuana due to “car accidents”—though she had done no research on that, either.

The CMA’s new report, interestingly enough, sheds light on statements like Nelson’s. It says that prohibitionists often make unsubstantiated claims about car crashes or other purported harms. Studies disagree on its risks to motorists, though there’s no question that booze increases the chances of a crash, the report says. Moreover, simulated driving tests reveal that pot smokers overestimate their degree of impairment and “compensate effectively.”

The latest crackdown will be bad for the pot business. No question. But Obama could be doing much, much more.

He could go after patients. Over the summer, a federal judge ruled that the DEA could peek at the names on Michigan’s patient registry. Because marijuana is illegal under federal law, said Judge Hugh Brenneman Jr., patients can’t expect privacy.

Last week, the feds raided several growing operations in California and Oregon (a few months after a particularly brutal crackdown in Spokane), including one in Mendocino County that appeared to be playing by the state rules. But it seems safe to assume that few of the hundreds of other growers in Mendocino County did not uproot their crops in response—just as the hundreds of dispensaries in California did not immediately close their doors after the feds’ ominous warning on October 7.

The industry seems to be practicing a form of civil disobedience. And it has tens of thousands of seriously sick people behind it, who will holler loudly if they’re forced back to the black market.

Indeed, there are some signs that Obama’s crackdown will be a “passive-aggressive” strategy: Rather than offend Americans with news footage of police raids, Obama has launched a war of attrition.

Landlords, worried the feds will steal their property, will tell dispensaries to move out. Banks won’t handle money for pot-themed businesses. Dispensaries will be taxed so heavily they won’t be able to cover the payroll or pay the electric bill.

Yet it remains to be seen whether federal prosecutors, who undoubtedly have even more serious criminals with which to contend, are willing and able to carry out the threat. When Jack Gillund, Melinda Haag’s spokesman, was asked whether her office had the resources to go after every dispensary or grower who didn’t comply with the 45-day deadline, he offered a simple reply: “No comment.”

Horwood also says that it’s wrong to call it “Obama’s crackdown.” She says the California U.S. Attorneys decided to take action on their own because the situation has grown out of control among recreational users. But she acknowledges that they received Obama’s blessing.

It’s a classic political strategy: Send the underlings out to take the heat while the bosses hide under their skirts.

Either way, the end result casts Obama as even more zealous than George W. Bush, who threatened owners of dispensary properties in 2007, but never followed up. Meanwhile, Colorado and other states have seen no similar crackdowns. Only time will tell whether Obama plans to destroy the entire medical-marijuana industry, or merely smack California around for a bit.

A million patients can’t be wrong

An estimated one million people in California have obtained a doctor’s recommendation to grow and use marijuana legally. Patient estimates in Washington are hazier, but the number is thought to be around 100,000.

If the feds shut down every dispensary in the country, all these people will still be able to legally possess marijuana—no matter where they bought it—under their state laws. The only difference is they’ll be forced to go back to buying their weed from Mexican drug cartels, rather than from Americans who provide jobs and pay taxes.

It’s akin to the feds saying that Anheuser-Busch can no longer sell beer; they’d prefer that people only buy from Al Capone.