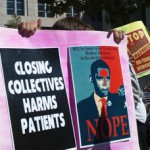 Supporters of California’s medical marijuana laws will be protesting the Department of Justice’s crackdown on dispensaries and providers when President Obama comes to visit San Francisco at the Hotel W on Oct 25th. Demonstrators will be protesting at the corner of 3rd and Mission from 10:30 AM to 3 PM. Advocates will hold a preceding press conference at 10 AM at the Marriott Hotel. 299 Second St, SOMA Room #3.

California NORML is denouncing the DOJ crackdown as a bankrupt and cynical attack on state and local medical cannabis laws. “Contrary to DOJ claims that they are targeting abusive profiteers, their list of targets includes some of the most respected and best regulated facilities in the state, ” states Cal NORML Director Dale Gieringer.

The US Attorney of Northern California has threatened dispensary landlords with property forfeiture for operating too close to schools and parks, citing a federal drug-free school zone statute that prescribes enhanced penalties for operating within 1,000 feet of schools and playgrounds. However, California law allows dispensaries and collectives (like liquor stores) a 600 feet buffer zone from schools, with further restrictions as prescribed by local ordinance.

The US attorney has complained that the Marin Alliance for Medical Marijuana, the oldest dispensary in the state, is located within 1,000 feet of Bolinas Park, where Little League baseball is played. However, the Marin Alliance closes when little league games are played, and has operated for 15 years without complaint in the city of Fairfax, which officially supports its operation.

“The Marin Alliance has been a model of effective local oversight of medical cannabis dispensaries,” objects Fairfax Mayor Larry Bragman in a letter to the US Attorney. “Closure of this facility will eliminate significant sales tax revenue for the Town of Fairfax and needlessly increase the suffering of hundreds of patients who have come to rely on it as a safe access point for medical marijuana.”

In San Francisco, the US Attorney has cited two dispensaries, Medithrive and 208 Valencia, for being within 1,000 feet of a school. However, the school moved in after the collectives, and has made it known that it has no problems with them. Another S.F. dispensary, the Divinity Tree, has been cited for being within 1,000 feet of a playground; yet several bars and sex clubs are located closer.

“The DOJ’s complaints represent a frivolous and cynical attack on land use decisions that properly belong to local government,” says Gieringer. “This is a blatant example of federal government over-regulation run amok.”

In yet another federal attack on local control , the DEA raided Northstone Organics, a flagship participant in the Mendocino County Sheriff’s pioneering program to license medical cannabis gardens. Northstone’s director, Matt Cohen, who has been a leading advocate of the Mendocino program, was rousted out of bed by automatic weapon-toting DEA agents, who handcuffed him and his wife, ransacked their home, and destroyed the collective’s 99-plant garden while deriding Mendocino’s program as a “sham.” The program has raised over $300,000 for the cash-strapped county.

“The federal government is deliberately sabotaging successful medical cannabis programs in order to shore up its bankrupt policy of denying legal access to marijuana,” says Gieringer.

The DOJ offensive is just the latest in an escalating series of federal attacks on medical marijuana under the Obama administration:

• US Attorneys have threatened local officials with criminal charges if they pass laws to authroize medical cannabis production and distribution.
• The IRS has assessed crippling penalties on tax-paying dispensaries by denying standard business expense deductions.
• The Department of Treasury has browbeaten banks into closing accounts of medical marijuana collectives.
• The Bureau of Alcohol Tobacco and Firearms has warned firearms dealers not to sell drugs to medical marijuana users.
• The DEA has blocked a 9-year old petition to reschedule marijuana for medical use, ignoring extensive scientific evidence of its medical efficacy.
• NIDA has blocked proposed research on medical marijuana to treat post-traumatic stress disorder.

California NORML estimates that the state’s medical marijuana industry generates $1.5 – $4.5 billion in business, over $100 million in taxes, and tens of thousands of jobs in the state.

“”With the federal budget on empty, the economy in disarray, our prisons overflowing, and prohibition-related violence raging across the border, it’s an outrageous misuse of federal resources to wage war on medical marijuana,” says Gieringer. “Federal anti-drug bureaucrats are afraid because the dispensaries are proving that it’s possible for marijuana to become a safe, legal, tax-paying industry and so expose their own last-century policies as bankrupt and obsolete.”