Not my president. -UA 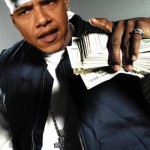 Medical marijuana advocates, including dispensary operators and cultivators threatened with federal charges or property seizures, will use President Barack Obama’s appearance in San Francisco today to protest “his administration’s new attack on the medical marijuana community.”

With the president in the city for a $7,500-per-plate fundraiser at the W Hotel, activists will hold a media gathering at another hotel “to call for federal policy reform” on medical marijuana, said California Assemblyman Tom Ammiano.

The San Francisco Democrat is due to appear at press conference at the Marriott Courtyard Hotel along with Lynette Shaw, director of California’s longest operating dispensary, the Marin Alliance for Medical Marijuana.

The landlord for the dispensary, opened in 1996 and licensed by the city of Fairfax in 1997, was threatened in a letter by San Francisco U.S. Attorney Melinda Haag with seizure of the property. Haag’s letter also said dispensary operators could be subject to charges resulting in up to 40 years in prison under federal laws against narcotics dealing within 1,000 feet of a park.

Also scheduled for the event is Matt Cohen, whose Mendocino County Northstone Organics medical marijuana farm was raided by U.S. drug agents this month despite the fact his plants are tagged and monitored by the local sheriff under a county-supervised medical marijuana cultivation compliance program. He is expected to be joined by Steve DeAngelo, director of the Harborside Health Center, California’s largest medical marijuana dispensary. The Internal Revenue Service has demanded $2.4 million in tax penalties, declaring Harborside couldn’t take deductions for employee salaries and other business costs due to federal drug trafficking laws.

On October 7, California’s four U.S. attorneys announced charges against other dispensaries and growers as well as financial speculators throughout the state’s medicinal pot market.

The cases included that of a Southern California attorney said to have raked in millions of dollars while organizing a vast growing networks for dispensaries, including convincing two Sutter County tomato growers to convert their greenhouses to marijuana.

Also charged were operators of a North Hollywood medical marijuana store accused of shipping hundreds of pounds of marijuana out of state and six people tied to Sacramento’s R & R Wellness Collective dispensary in a case that has included allegations of hoarding more than $250,000 in cash and distributing marijuana outside the store.

Haag said California’s 1996 Compassionate Use Act for Marijuana “has been hijacked by profiteers who are motivated not by compassion but by money.”

However, in a recent statement, Ammiano said Obama’s justice department is overreaching in a broad “destructive attack on medical marijuana patients” that “is a waste of law enforcement resources and will cost the state millions in tax revenue and harm countless lives.”