This drug war ruins lives, while doing nothing to curb drug use. -UA 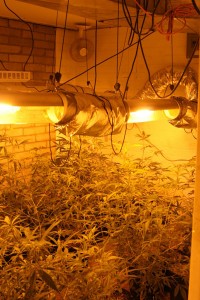 SPRING VALLEY, Ariz. — The Yavapai County Sheriff’s Office is looking for a man they say was growing marijuana in his home where he lives with his son and three grandchildren.

The sheriff’s office was contacted after a representative from Children’s Protective Services found marijuana growing inside Brown’s Spring Valley home while checking on the welfare of his three grandchildren, all under the age of 9.

A sheriff’s deputy arrived to assist the CPS employee and found more than 100 marijuana plants growing in the basement, according to YCSO spokesman Dwight D’Evelyn. Marijuana was also found in the bedroom of Larry Brown Jr., the children’s father.

D’Evelyn said Brown Jr. was present and expressed no concern regarding his children’s access to the marijuana. He explained that his dad was growing marijuana for a Phoenix resident and said his dad had a medical marijuana card from California.

Detectives were able to reach Brown Sr. by cell phone and they said that he admitted growing the marijuana plants. He was hoping to provide product for Arizona medical marijuana dispensaries but since the state’s medical marijuana program is on hold, he was in the process of selling the plants in the Phoenix area.

Brown Jr. was arrested for three counts of child endangerment, possession of marijuana and possession of drug paraphernalia. He was booked at the Camp Verde Detention Center. CPS assumed custody of his children.

Brown Sr. has not been located and detectives have obtained a warrant for his arrest.