Not as glorious as a repeal, but a good start…..-UA

This represents something of a landmark — so far as I can tell, this is the first independent and scientific national survey to have found a plurality in support of legalizing marijuana. But let’s take a quick look at it in the context of other surveys on the question.

What I’ve done here is to gather all of Gallup’s past polls on legalization, which date back to 1969, along with other surveys included in the PollingReport.com database. I’ve also included polling from the General Social Survey, which has been conducted roughly once every other year since 1972. (The most recent edition of the General Social Survey, in 2010, also found a significant increase in support for marijuana legalization — up to 48 percent support from 38 percent when the poll was conducted in 2008). 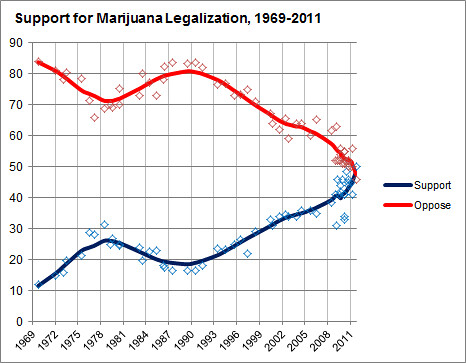 If you plot the polls on a graph and use regression smoothing to create trendlines from them, it implies that opinion on marijuana legalization is probably now divided about equally, with about 48 percent of Americans in favor, 48 percent opposed, and a small number undecided.

But I would advise some caution. This issue is not surveyed as frequently as something like gay marriage, so the polling is not as robust, and the statistical technique applied here can sometimes be too eager in chasing down trends.

Simply taking an average of the three surveys on legalization conducted so far in 2011 finds 45 percent in favor and 51 percent opposed, which I suspect is a more realistic estimate of the current state of opinion.

At the same time, it’s clear that opinions on legalization have been shifting — quite radically, in fact, from the 1980s and early 1990s, when polls generally found only about 20 percent support.

It should also be clear from the chart that there is no guarantee that support for legalization will continue to grow. It dropped quite a bit between the late 1970s, when pollsters were finding about 30 percent in support of legalization, and the “Just Say No” to drugs years of the following decades.

But the legalization position should have something of a wind at its back because of generational politics. In the Gallup poll, there is a fairly sharp split between those who came of age in the 1960s, and those aged 65 and older — many of whom grew up in a generation when marijuana use was not common. Only 31 percent of the older group support legalization now.

Meanwhile, support is as high as 62 percent among Americans under age 30, although there is some evidence that support for legalization can erode as people age and have children.