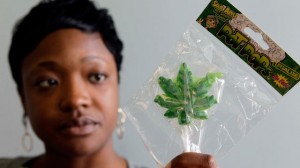 Lollies shaped like marijuana that are showing up on shop shelves around the US won’t get kids high, but aghast city leaders and anti-drug activists say the product and grocers carrying it represent a new low.

“So to have a licenced store sell candy to kids that depicts an illegal substance is just ignorant and irresponsible.”

The “Pothead Ring Pots”, “Pothead Lollipops” and bagged lollies are distributed to retail stores by the novelty supply company Kalan LP of Philadelphia.

Company president Andrew Kalan said the sweets, on the market six to nine months and in 1000 stores around the country, promote the legalisation of marijuana.

“It does pretty well,” he said.