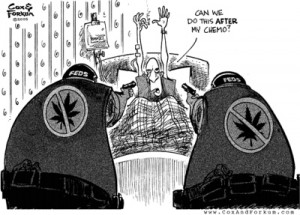 SAN FRANCISCO—Federal prosecutors have launched a crackdown on pot dispensaries in California, warning the stores that they must shut down in 45 days or face criminal charges and confiscation of their property even if they are operating legally under the state’s 15-year-old medical marijuana law.

In an escalation of the ongoing conflict between the U.S. government and the nation’s burgeoning medical marijuana industry, California’s s four U.S. attorneys sent letters Wednesday and Thursday notifying at least 16 pot shops or their landlords that they are violating federal drug laws, even though medical marijuana is legal in California. The attorneys are scheduled to announce their coordinated crackdown at a Friday news conference.

Their offices refused to confirm the closure orders. The Associated Press obtained copies of the letters that a prosecutor sent to 12 San Diego dispensaries. They state that federal law “takes precedence over state law and applies regardless of the particular uses for which a dispensary is selling and distributing marijuana.”

“Under United States law, a dispensary’s operations involving sales and distribution of marijuana are illegal and subject to criminal prosecution and civil enforcement actions,” letters signed by U.S. Attorney Laura Duffy in San Diego read. “Real and personal property involved in such operations are subject to seizure by and forfeiture to the United States … regardless of the purported purpose of the dispensary.”

The move comes a little more than two months after the Obama administration toughened its stand on medical marijuana following a two-year period during which federal officials had indicated they would not move aggressively against dispensaries in compliance with laws in the 16 states where pot is legal for people with doctors’ recommendations.

The Department of Justice issued a policy memo to federal prosecutors in late June stating that marijuana dispensaries and licensed growers in states with medical marijuana laws could face prosecution for violating federal drug and money-laundering laws. The effort to shutter California dispensaries appears to be the most far-reaching effort so far to put that guidance into action.

“This really shouldn’t come as a surprise to anyone. The Administration is simply making good on multiple threats issued since President Obama took office,” Kevin Sabet​, a former adviser to the president’s drug czar who is a fellow at the University of Pennsylvania’s Center for Substance Abuse Solutions. “The challenge is to balance the scarcity of law enforcement resources and the sanctity of this country’s medication approval process. It seems like the Administration is simply making good on multiple statements made previously to appropriately strike that balance.”

The landlord was ordered to evict the pot club or risk imprisonment, plus forfeiture of the property and all the rent he has collected while the dispensary has been in business, Anton said.

The Marin Alliance’s founder “has been paying state and federal taxes for 14 years, and they have cashed all the checks,” he said. “All I hear from Obama is whining about his budget, but he has money to do this which will actually reduce revenues.”