We need to elect a Minister of Marijuana, for the people. -UA 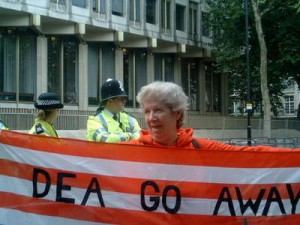 TUCSON, AZ (KOLD) – The arrest of  a Tempe medical marijuana owner and her boyfriend was striking a chord, among Tucson card holders, waiting to legally buy the drug.

D.E.A. officials raided the dispensary and home of Rachel Beeder and her boyfriend James Chaney, after getting reports that the two were selling medical marijuana to those who said they needed it.

Beeder spoke to a KSAZ-TV reporter from her jail cell.

She said she would gladly go to jail for medical marijuana, because Arizona voters had said yes to providing it to those who needed it.  Beeder was licence by the state to be a care-giver and provide medical marijuana to up to five patients, but due to a lawsuit filed by the state, the law was on hold.

Tucson medical marijuana card holder Bob Cherry was not surprised to hear about Beeder’s arrest, and that people were resorting to buying the drug illegally.

“I would hope I don’t have to break the law and go to jail.  It’s easy enough.  All it does is keep a cartel in business,” said Cherry.

Cherry was frustrated with the state government, saying they had no problem charging him $150 for his medical marijuana licence, but they were not providing the service he had paid for.

Many card holders, like Cherry were getting tired of waiting, and turning to the Internet for their prescriptions.

A quick search of Tucson’s Craigslist reveals a list of local growers who are willing to provide medical marijuana to card holders for a “donation.”

In his ad, one grower stated “we are a family operated operation just wanting to help others.”

Beeder said she was also trying to help those in pain.

“I am a good person out here trying to help these people who have medical issues that are taking drugs that aren’t good for their bodies, and they’re killing them.”

Vicky Puchi-Saavedra, a Tucson woman who had applied for permits to open five dispensaries in Tucson was outraged, and concerned to see the “black market” for medical marijuana on the Internet.

Puchi-Saavedra said that was the easiest way to violate federal laws, and dispensing medical marijuana should be left up to licence professionals.

“You want to sell medical marijuana, you have to regulate it otherwise you’re opening the door to the black market.”

A D.E.A spokeswoman said the federal government does not recognize the term “medical marijuana.”  It was still considered a controlled substance, and those trying to sell it would be arrested, and prosecuted for dealing drugs.