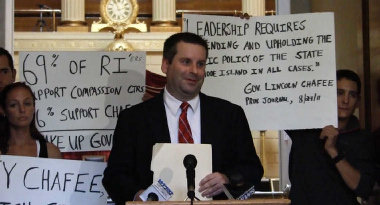 PROVIDENCE — Patients and advocates in the state’s medical-marijuana program rallied at the State House Tuesday to voice their frustration and disappointment in Governor Chafee for failing to issue licenses to three marijuana dispensaries that are permitted under Rhode Island law.

Speaker after speaker stepped up to the lectern outside the chambers of the General Assembly and reminded the small crowd of about 30 supporters that the governor has been dragging his feet for 149 days. That was when the Health Department announced that it had selected three businesses to sell marijuana to patients registered in the state program.

They hoisted signs that read, “Hey Chafee Which State Law Will You Ignore Today,” and “69% of Rhode Islanders Support Compassion Ctrs; 36 % Support Chafee. Wake Up Governor.”

JoAnne Leppanen, executive director of the Rhode Island Patient Advocacy Coalition, said that patients and advocates are so fed up with Chafee’s inertia that they are exploring the possibility of filing a lawsuit against him.

“We are going to appeal to the judiciary and see if a judge will order the governor to issue the licenses,” she said.

She said that they have spoken with representatives from the American Civil Liberties Union about taking legal action against Chafee. Steven Brown, executive director of the ACLU’s local affiliate, attended the rally. He said that Chafee should end the delays.

“There is nothing preventing the governor from issuing these licenses,” he said.

Christine Hunsinger, Chafee’s communications director, did not respond to requests for a comment.

A few weeks after the Health Department announced the selection of the three dispensaries last spring, Peter F. Neronha, the U.S. Attorney for Rhode Island, sent Chafee a letter, warning him that if he issued the licenses, the operators and anyone affiliated with the new businesses could face criminal and civil action.

Neronha’s letter was identical to letters that other federal prosecutors sent to governors in states such as Maine, Vermont and New Jersey that passed laws permitting the establishment of marijuana dispensaries.

Neronha’s threat caused Chafee to place plans to issue the licenses on hold. He and members of his staff said they wanted to study the issue further, and get clarification from the Justice Department in Washington.

Chafee’s decision didn’t sit well with the operators of the three dispensaries in Rhode Island. The growing number of patients in the program, now about 4,000, also were furious. They said that they have to turn to drug dealers, or go without marijuana, to cope with debilitating illnesses such as chronic pain, nausea from cancer treatment, insomnia and neurological problems.

The patients and advocates also point out that Maine, Vermont, Delaware, New Jersey and the District of Columbia have ignored the federal threats and are pressing ahead with plans to open dispensaries. At least two are open for business in Maine and, in New Jersey, Gov. Christopher J. Christie, a former U.S. Attorney, said two months ago, “It’s a risk that I’m taking as governor.”

Rep. Scott A. Slater, D-Providence, the son of Rep. Thomas C. Slater, D-Providence, the late legislator who championed the legalization of marijuana, said it’s time for Chafee to pull the trigger. He said the issue has been “reviewed and researched” enough. He said that he will not entertain any suggestion from Chafee that the General Assembly revisit or change state marijuana laws.

“The needs of the patients are more important than threats from the federal government,” Slater told the crowd. “I hope the governor and his team will give you the respect you deserve.”

Under the current system, licensed caregivers are the only ones in the state who can legally grow marijuana for patients in the program. That number has grown to about 2,500, but many patients have disagreements with their caregivers over pricing, or sometimes, the crops simply go bad.

As a result, they cannot get the marijuana for medicinal purposes. The compassion centers would ensure that the drug is always available.

Leppanen, RIPAC’s top official, said that this summer’s humidity and the power disruption from Tropical Storm Irene damaged a large portion of the caregivers’ crops. She said the delays in issuing the dispensary licenses “is causing real stress. Real pain.”