K2 is NOT MARIJUANA. -UA 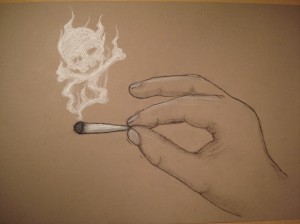 MANCHESTER— Two 19-year-old women were charged with drug possession after their car was stopped for speeding about 1 a.m. Saturday, said Capt. Lisa Parker.

Kristy A. Delillio, 19, of Beachwood was driving a 2003 Hyundai Elantra with passenger Amanda Harvey, 19, of Bayville on Route 70. The car was stopped for speeding at Route 70 and Route 539 by Patrolman Christian Nazario, Parker said.

Nazario found both women to be in possession of K-2 marijuana, and drug paraphernalia, Parker said.

K-2 is a synthetic marijuana that is illegal for a business to sell and for an individual to possess in New Jersey, police said.

Manchester Police have seen the use and possession of K-2 spike since the recent national trend of the synthetic drug, Parker said.

The Manchester Police Department has zero tolerance for anyone who is found to be in possession of K-2 or any business that is selling K-2. Strict enforcement in this area will continue throughout the township.