Act leader Don Brash wants the use of cannabis decriminalised, saying too much valuable police time is taken up enforcing a law that is flouted by about 400,000 people a year. 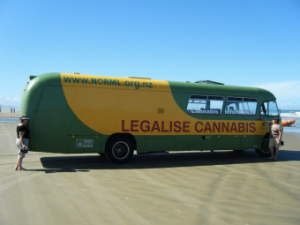 “I’m haunted by the thought that all that police time and all those police resources could be better deployed in actually keeping us safe from real criminals intent on harming us,” he said in Pakuranga yesterday.

But instead, the law made criminals of 400,000 New Zealanders who were harming no one except arguably themselves “which is their prerogative in a free society”.

Dr Brash is yet to convince his own party of the merits of the case, a party that prides itself on being tough on crime as well as libertarian. He said it was a personal view.

Dr Brash said he had not smoked marijuana and was not advocating its use. But his personal view is expected to raise some questions in Act.

A spokeswoman for Prime Minister John Key said: “National has long held the view this would be a step in the wrong direction.”

Dr Brash raised the cannabis issue in a formal speech on law and order yesterday where he also set out a firm new policy enshrining the right to self-defence in the Bill of Rights Act.

That would make it more acceptable in law for a shopkeeper to belt an intruder with a hockey stick, or allow a farmer to shoot someone stealing his farm bike.

“Your home is your castle – your body is your temple,” Dr Brash said. “The law must be unequivocal in allowing you to defend both with reasonable force.”

The laws that police enforced should be keeping people safe from criminals.

“Laws that do not serve that purpose, and indeed possibly make us more vulnerable to criminals, should not be on the statute books to begin with.

“After long and painstaking reflection, I have come to have serious questions about our marijuana laws.”

Since 1927, it had been a criminal offence to possess, use, produce or sell cannabis in New Zealand.

Dr Brash said the police and the courts spent about $100 million a year enforcing the prohibition of a drug believed by many people to be less dangerous than tobacco or alcohol.

“Is there really any point to this?”

About 6000 people were prosecuted every year for cannabis offences and 400,000 New Zealanders were estimated to use cannabis.

“In other words some 400,000 New Zealanders routinely flout the law – roughly 10 per cent of the total population – has the sky fallen in?”