Mind your own damn business. -UA 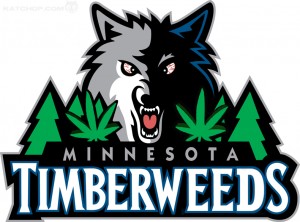 MINNEAPOLIS – The discovery of marijuana growing in a Minnesota state park was unusual, but authorities said Wednesday it’s not unheard of for clandestine growers to plant pot on public and secluded lands in the state, so hunters and hikers should be alert when heading into the woods this fall.

A hiker’s tip Sunday led officers to a crop of 187 marijuana plants ready for harvest in a remote part of Maplewood State Park near Pelican Rapids in western Minnesota. Officials spent the next morning removing the 5-foot-tall plants.

Otter Tail County sheriff’s detective Rod Jensen said Wednesday there had been no arrests, but investigators were hoping to lift fingerprints from some of the evidence seized at the scene.

“Nobody’s reported it stolen or missing yet,” Jensen said with a laugh.

Richard Sprouse, spokesman for the enforcement division of the Minnesota Department of Natural Resources, said he could not recall a similar discovery at a state park in his 14 years on the job. Sprouse said he actively looks for trends as he compiles a weekly roundup of DNR enforcement activities around the state and likely would have heard of any major pot farms found in a state park.

Dave Bjerga, assistant superintendent for the state Bureau of Criminal Apprehension, said authorities get sporadic reports of marijuana growing on public lands, but it’s more common for law enforcement officers to find it growing indoors or on private property.

“It’s an epidemic by no means, but it’s a safety issue for folks who are going to use the woods this time of year,” Bjerga said.

Pot farms have been a huge problem, however, in California and some other states. Authorities uprooted 460,000 pot plants and arrested more than 100 people this summer in the Mendocino National Forest. The two-week operation was part of an annual effort to purge public lands across California, where investigators report seizing millions of plants from public parks, forests and wilderness areas every year.

Federal prosecutors charged six men last month after a raid on a large-scale operation in the Chequamegon-Nicolet National Forest in northern Wisconsin that netted nearly 10,000 marijuana plants with an estimated street value of $1 million. Authorities broke up an even larger growing operation in the same forest a year earlier.

Jensen said the discovery at Maplewood State Park wasn’t the first pot farm he’s investigated on public land. Raccoon hunters running their dogs on federal and state land west of Fergus Falls came upon a small operation about three or four weeks ago where investigators collected 18 plants. Jensen said he walked back into the area later that day and found about 20 more plants being cultivated.

“So it’s around, but thank God we don’t have the people who put up booby traps and things like that. At least we haven’t run across that here,” the detective said.

Dea: Since the law is ignorant, so shall we be.