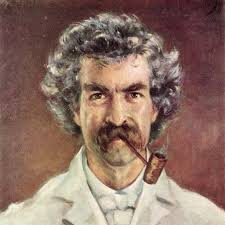 Mark Twain turned to writing humor after meeting the author of The Hasheesh Eaterin San Francisco – and possibly trying it himself.

This Saturday will be the anniversary of a certain stoned stroll down Clay Street in San Francisco in the ’60s – the 1860s, that is. The San Francisco Dramatic Chronicle (which you can hold in your hands today as the Chronicle) ran this little item on Sept. 18, 1865:

It appears that a “Hasheesh” mania has broken out among our Bohemians. Yesterday, Mark Twain and the “Mouse-Trap” man [Tremenheere Lanyon Johns] were seen walking up Clay street under the influence of the drug, followed by a “star,” who was evidently laboring under a misapprehension as to what was the matter with them.

What a tantalizing tidbit from the town once called Yerba Buena that, a century later, became known as the place where hipsters wore flowers in their hair.

At the time, concentrated cannabis in tincture or solid form was commonly available in drug stores. One, Richards & Co., stood at the corner of Clay and Sansome streets and advertised Hasheesh Candy in the Chronicle in 1872. This may be where Twain and Johns procured theirs. The corner is near the Financial District, where today Mark Twain Plaza and the Transamerica Pyramid stand.

Samuel Clemens, who had just begun to call himself Mark Twain, visited San Francisco in June of 1863, and was hired as the San Francisco Daily Morning Call‘s Nevada correspondent. In the city, he crossed paths with Fitz Hugh Ludlow, the author who was well known for writing Confessions of a Hasheesh Eater (1857).

And if Fitzhugh Ludlow, (author of the “Hasheesh Eater,”) comes your way, treat him well also. He published a high encomium upon Mark Twain, (the same being eminently just & truthful, I beseech you to believe,) in a San Francisco paper.

Fitz Hugh Ludlow, author of The Hasheesh Easter.Twain was referring to an article Ludlow wrote for the Golden Era newspaper, published in November 1863. Ludlow wrote, “In funny literature, that Irresistible Washoe Giant, Mark Twain, takes quite a unique position … He imitates nobody. He is a school by himself.” Ludlow suggested that Twain should focus on his humor rather than straight news writing, and said he would help get them published.

Twain was always looking for ways to get rich. He had just tried gold mining and in 1856 he attempted to travel to Brazil to start a business importing coca. Ludlow’s biographer David Dulchinos speculates that Twain may have been one of Fitz Hugh’s guides when he visited an opium den in San Francisco.

First given morphine for tuberculosis, Ludlow struggled with opiate addiction, except perhaps when he took cannabis pills. He wrote a short story about a doctor who uses such substitution therapy to successfully treat an opium addict.

In November 1865, Twain’s humorous piece, “The Celebrated Jumping Frog of Calaveras County,” made him nationally known. He’d finally hit upon his most marketable talent, with the aid of Ludlow’s advice and possibly hashish too. The story appeared just two months after he was spotted in San Francisco on his September stroll up Clay Street.

The “star” mentioned in the Chronicle who followed the young writers was probably a policeman. Johns, Twain’s party buddy, wrote a column in The Californian called “The Mouse-Trap”. The item referenced more “experiences of the twain” in the following issue of The Californian, where A. Miner Griswold, a newspaperman Twain knew later in Buffalo, fancifully describes a case of the munchies he had after taking “hasheesh.”

Twain never writes that he took hashish, but he mentions it in an article for Alta California (March 3, 1868) titled “Mark Twain on His Travels” where he offered a critique of “The White Fawn”:

I think these hundreds of princely costumes are changed every fifteen minutes during half the night; splendid pageants are filing about the stage constantly, yet one seems never to see the same dress twice. The final grand transformation scene is a vision of magnificence such as no man could imagine unless he had eaten a barrel of hasheesh.

A young Mark Twain.He was one of many authors who sought a hashish experience in the Middle East when he toured there in 1867. A popular collection of his travel letters, The Innocents Abroad, recounts a disappointing experience he had with a narghili in a Turkish Bath in Constantinople. A chapter not published in the book describes his impression of Alcazar, palace of the Moorish kings, which he saw on his first morning in Seville (after a night out on the town):

I cannot describe it. In my memory its courts & gardens will always be a hasheesh delusion, its Hall of Ambassadors a marvelous dream.

Another Buffalo newspaperman acquainted with Twain was John Hay, who was Abraham Lincoln’s secretary and a US Secretary of State. Hay was influenced by Ludlow’s writings, and famously tried hash while a student at Brown University.

We don’t know if Buffalo buddies Twain and John Hay, or Griswold, ever used hashish together, but the party seemed to be over for the group after they married. Twain wrote from Florence, Italy in 1904 this reminiscence:

A quarter of a century ago I was visiting John Hay, now Secretary of State, at Whitelaw Reid’s house in New York…That Sunday morning, twenty-five years ago, Hay and I had been chatting and laughing an carrying-on almost like our earlier selves of ’67, when the door opened and Mrs. Hay, gravely clad, gloved, bonneted, and just from church, and fragrant with the odors of Presbyterian sanctity, stood it in….She came forward smileless, with disapproval written all over her face, said most coldly, “Good morning Mr. Clemens,” and passed on and out. [Hay] said pathetically, and apologetically, “She is very strict about Sunday.”

In 1867, a year Twain remembers as “chatting and laughing and carrying-on,” he was reportedly arrested for misconduct in New York City and spent a night in jail. Twain later admitted (reportedly) to an arrest for smoking a cigar on federal property and also a second arrest.

Today the United States’ top comedians are honored with The Mark Twain Prize for American Humor, bestowed yearly at the Kennedy Center in DC. When Steve Martin won the prize in 2005 he joked, “If [Saturday Night Live producer] Lorne Michaels had told me I’d receive this award one year after him, I’d have said, ‘Let me have a hit of that.’”

Other comedians who’ve won the prize and toked in their lives and/or work include George Carlin, Whoopi Goldberg, Lily Tomlin, Neil Simon and Richard Pryor. Carlin said later in life that he didn’t smoke very often, but when he did, he liked to “punch up” his writing while under the influence.

Mark Twain said, “Against the force of laughter, nothing stands.” With so many of our luminaries admitting to using a little herbal inspiration, isn’t it time to tear down the prohibition that tears us apart?