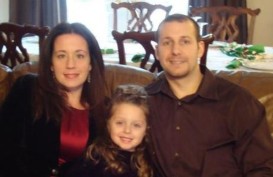 Peter Fontana and his fianceé Laura Matteson were like any other couple preparing for their wedding. The ceremony was planned, reception booked and final dress and tux fittings scheduled. All that was left was the rehearsal and final countdown to their big day.

Devastating news from Fontana’s doctor, however, forced the couple to put their fall wedding on hold.

The Johnston resident, who lived in Cranston most of his life, is not a fan of doctors, but constant high fevers forced him to give in and visit his physician. A blood test showed he had a low platelet count and further tests revealed shocking news–he had been living with Acute Myelogenous Leukemia for three years. AML is a cancer of the blood and bone marrow and it’s the most common type of acute Leukemia in adults.

Days later, Fontana was admitted to the Bone Marrow unit at Roger Williams Medical Center in Providence, the only one in the state, and given aggressive chemotherapy treatment. He has been hospitalized since August 18 and will undergo another round of treatment this week.

The otherwise perfectly healthy small business owner was devastated by the news and severity of his cancer and so were his loved ones.

“I felt frozen, nervous and sick,” Matteson said. “I remembered trying to stay strong and positive so Pete wouldn’t see me worried.”

“Honestly, it’s awful and the first thing I thought of was why him,” said Tricia Flori, Fontana’s younger sister. “I wanted it to be me instead. He had so much to look forward to in the next few months and now it’s all on the backburner.”

Her brother needs a bone marrow transplant. She and her sister Christina have been tested, but neither are a match. Doctors have found two possible matches from the bone marrow bank. If a match is found, Fontana will have a transplant at the end of October.

Flori said she and the rest of her family are doing what they can to be strong and are collaborating with friends and relatives to help him through not only the emotional, but financial hardship that will come from him not being strong enough to work. An entrepreneur, Fontana started two small businesses, Pro Building Inc. and Rhode Island Inflatables.

A mother of two, Flori said she is putting her own feelings aside and doing what she needs to do for her brother and Matteson. She and family friends have organized a yard sale. All sales and any donations will go to helping the family. The yard sale is being held Saturday, Sept. 17 8 a.m. at 59 Nelson Rd. in Cranston (off Comstock Parkway).

“She’s my best friend and he’s my brother and I feel like I have to be strong and support them,” Flori said.

Close friend and Cranston school teacher Melissa Polofsky has organized a dress down day for the month of September. Each month the staff at Hope Highlands contribute to a cause in order to dress down one day each week. Polofsky, who has been a close family friend of the Fontanas, has encouraged her colleagues to dress down for Fontana.

Fontana has good days and bad. There are days when he is weak and can barely pick up the phone, she said.

“We are speaking to him in a positive way,” Flori added. “He will get better. It will take time. It takes strength and we tell him to keep looking forward to the day he will marry Laura.”

Fontana has another special lady in his life. Her name is Lina and she’s four. He has not been able to see his littler girl because of his weakened immune system. Not seeing his little girl has been a challenge to Fontana who describes Lina as his life.

“He and Laura explained to her that daddy was sick but, was with doctors and they would be there to help him,” Flori said. “They explained the mask he had to wear and scrubs and they told her she needed to wash her hands all of the time before being near daddy.

The two have taken to the Internet to stay connected through Skype. Using Skype to connect has helped to create some normalcy for Fontana, but some days he’s too tired or sick from the treatment to see or talk to anyone.

Matteson is determined to bring her fiance home.

“I look at the love of my life in pain everyday and all I can keep telling him is I will make sure that we will do whatever it takes to get him health and strong again.”