This generation will be in office someday, the days of prohibition are numbered. -UA

Late this afternoon, the Governor released this statement to KRCG:

“This is a private matter that will be handled through the municipal process.  My son is a fine young man, and we will be working through this issue as a family.” 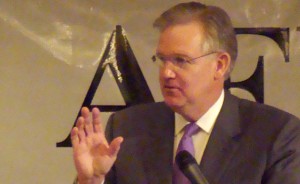 At 1:23 am., Saturday, Columbia Police were dispatched to a loud party and possibly a disturbance at Brookeside Apartments, 120 S. 10th Street Apt. 207. Upon entering the apartment complex, police reported an “overwhelming smell of marijuana in the hallway.” They also found multiple apartments with open doors.

“We’ve been getting calls about loud parties at this complex every weekend,” Columbia Police Spokesperson Jill Wieneke said.

Officers said they put their heads in one of the lower-level apartments and reported seeing marijuana on the table at the apartment. A young man at the table, later identified as 21-year-old Willson Nixon, allegedly tried to conceal the marijuana, according to Wieneke.

Wieneke said officers were not aware Willson was the Governor’s son, nor did he offer that information. But when officers started writing the ticket, a friend informed police about Willson’s relationship to the Governor. Police continued to write the ticket. The friend was also cited. The friend told KRCG Willson does not live at the apartment and the marijuana was not Willson’s.

Both were cited for possessing less than 35 grams of marijuana. Police said it was a case of active possession because Willson tried to conceal the marijuana.

This is an example of the “plain view doctrine”, according to Wieneke, and police had the right to enter the apartment after seeing the marijuana on the table.

Police searched the rest of the apartment and reported only finding alcohol and a pipe as well.

Nixon is scheduled to appear in court within the next 4-6 weeks. If found guilty, the judge can issue him a fine and/or community service. A mugshot was not available since only a citation was issued.

Repeated calls and emails to Governor Nixon’s Office throughout the day have gone unreturned.