One man killed, one busted for drugs after car drives through Illinois home

He should have thought on his feet better…..its pretty noble to take the wrap, but whose to say the garden didn’t belong to the dead guy….-UA 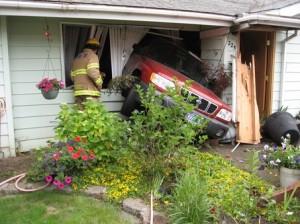 An 63-year-old woman’s car went crashing through a neighbor’s house on Saturday – killing one man while exposing the large marijuana operation of another, authorities said.

Zachary Isenberg, 28, died after the car went crashing through his house and killed him, the Chicago Sun-Times reported.

The cause of the accident was due to mechanical problems in the 1995 Mercury Grand, according to the newspaper. But for Isenberg’s roommate, Thomas J. Micucci, 27, his problems were just beginning.

As he was grieving the sudden loss of his friend and roommate, cops went through the house to see if there were more victims – and instead found a large stash of drugs.

Fire crews broke down a locked door and found about 30 marijuana plants, the Chicago Tribune reported. They were being raised with grow lights and a watering system, cops said.

When Micucci returned from the hospital, where Isenberg had been pronounced dead, he was cuffed by cops and charged with production of cannabis and unauthorized possession of a firearm, according to the report.

The car, meanwhile, is still in the house until authorities can figure out how to extract it without causing the home to collapse. The driver of the car and her passenger did not suffer serious injuries.

Micucci, meanwhile, was booked in the county jail.