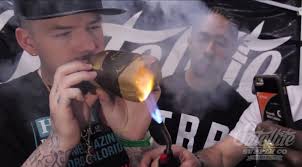 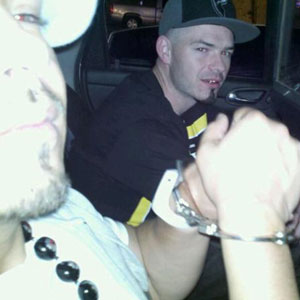 Rappers Paul Wall and Baby Bash (real names Paul Michael Slayton and Ronald Ray Bryant) found themselves in hot water on Saturday night when they were arrested for marijuana possession in a—wait for it!—drug-free zone in El Paso, TX.

El Paso County Jail Records show the two were arrested at 1:30 a.m. and were released around 1:30 p.m. after posting $300 bail. They were charged with possession of marijuana in a quantity of less than 2 oz.

So what did Mr. Wall have to say about the arrest on Twitter?

MORE: Ex-Playboy Playmate Gets Prison for Shooting Her Husband

It looks like the rappers received a music history lesson during their jail stay as Paul tweeted, “Fresh out the El Paso County jail wit @BabyBash @BIGGROY in the same tank they held Willie Nelson/Johnny Cash.”

He also posted pictures of the two of them in handcuffs in the back of the police car. Maybe they can use one of the pictures for a future album cover?

Thankfully, Paul found something good in all of this: “The good news is the Texans won,” he tweeted.

However, Baby Bash didn’t seem as thrilled with the arrest as his buddy. “Ain’t 2much worse than a ” HOE ASS PUNK EL PASO COP that abuses his authority, just cuz me and Paul wall are artists!” he tweeted. “Only GEEKS and fools who don’t have any spine abuses AUthority! But I’m back in the FLESH feelin so FRESH, out the tank mang!”

In case you didn’t understand that, Baby Bash then posted another message clarifying his previous tweet. “I’m not here to diss ALL police, they have a tuff gig and I respect that! BUT u have the ONE or TWO that will disrespect & abuse the power cuz maybe they got picked on in high school alot and now have a chip on they’re shoulder, and that’s exactly wut happened to Us, all we did was SMELL like weed and wen he couldn’t find it and we didn’t snitch on who sparked it he got overdramatic and took us in! He found out who we were and really got big shot on us! Haha even his partner said he’s a dick.”

We sincerely look forward to a song that uses this experience as inspiration.