This would be like banning balloons to curb breathing. -UA 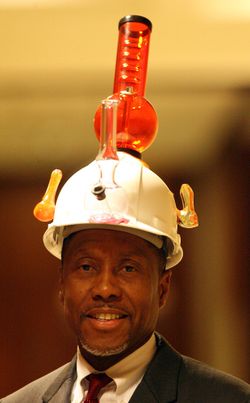 The sale of bongs will be banned in Victoria from next year under new laws to hinder cannabis use.

Marijuana smokers in Victoria, Australia’s most densely populated state, might have a hard time buying a bong if a proposed law is approved, according to 9News.

Starting January 1, 2012, it will be illegal to display and sell bongs, bong components and even bong kits, Mental Health Minister Mary Wooldridge said.

She claimed the reason for the crack down was that cannabis use is “associated with the increased risk of developing mental illness.”

Wooldridge said the legislation to be introduced into state parliament this week adding she does not expect the opposition party to support the ban.

“We hope that Labor will support this legislation, but they haven’t been consistent on this in the past,” she said.

“The changes being introduced into parliament will bring Victoria’s position on cannabis smoking paraphernalia in line with other states, which all have some restrictions in place,” Ms Wooldridge said.

Almost a third of Victorians over 14 say they have used cannabis.

Police will also enforce restrictions on the display of traditional hookahs, or water pipes, that look similar to bongs and are used to smoke tobacco.

It is illegal to use, possess, grow or sell cannabis in Australia, but penalties differ for each state or territory. In the Australian Capital Territory, South Australia, Western Australia and the Northern Territory there are differing degrees of decriminalization for minor offenses. In New South Wales, Victoria, Tasmania and Queensland the possession of cannabis is considered a criminal offense.