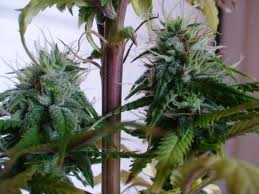 PHOENIX (AP) — State health officials have filed complaints against eight physicians who have recommended nearly half of the 10,000 Arizonans certified to use medical marijuana.

They say the physicians have failed to check patients’ prescription-drug histories, as required.

The doctor must perform a physical exam, review a year’s worth of medical records, discuss the risks and benefits of medical marijuana, and review a state database that tracks prescription-drug use.

The Arizona Republic (https://bit.ly/pM1Ln4) reports that physicians can face a variety of consequences, from a letter of reprimand to suspension of their license, if their regulatory boards find they falsified medical records or are otherwise guilty of unprofessional conduct.

In one case, a naturopathic physician issued recommendations to about 1,000 people but checked the state Board of Pharmacy’s controlled-substances database just 56 times, said Will Humble, director of the state Department of Health Services.

Because she indicated that she had checked the database on all the patients, Humble wonders what else she was lying about.

“It’s obvious that these physicians are not acting on the up and up,” Humble said. “To me, it’s an indicator of, ‘What else aren’t you doing?’ ”

A review of the patient’s drug-prescription history can help physicians determine whether medical marijuana is the best option or whether the patient is just looking to get high. The database tracks the log-in for every patient as well as searches for patients who aren’t in the system.

In an effort to prevent doctors from encouraging recreational-marijuana use, Humble asked his staff to pull the names of doctors who had written more than 200 recommendations since the law took effect in mid-April. Ten came up.

When patient records were compared with the state pharmacy database, it showed that eight of those 10 physicians — three allopathic doctors and five naturopaths — failed to review drug histories on many of their patients.

Three doctors had never logged on, although they had checked the box on hundreds of medical-marijuana applications saying they had reviewed the patient’s drug history.

The eight physicians account for nearly half of the 10,000 doctor recommendations in Arizona. The number recommended by each doctor ranged from slightly more than 200 to about 1,300.

Humble has no authority over Arizona physicians, but he reported the doctors to their regulatory boards this week. State law prohibits him from releasing their names, but they will become public if the boards agree to investigate.

Lisa Wynn, executive director of the Arizona Board of Medical Examiners, said a record-keeping violation would be relatively simple to review. A clinical investigation involving patient care, however, would involve hiring an expert in medical-marijuana use to evaluate whether physicians were acting appropriately.

If the board decides to investigate, a review committee will determine what discipline, if any, to recommend. The board can take that recommendation or issue its own, including dismissal of the complaint.

Proposition 203, approved by voters in November, legalized medical-marijuana use for people with certain debilitating conditions and allowed them to designate someone as a “caregiver” to grow or otherwise obtain marijuana for them.

About 80 percent of those issued state ID cards to use medical marijuana also are authorized to grow it.

The state was to begin licensing dispensaries in June, but a federal lawsuit filed by Gov. Jan Brewer put that process on hold, sparking a new round of legal action. Because there are not yet any licensed dispensaries, caregivers and patients are allowed to grow their own pot, up to 12 plants per person.