This is a joke. If they weren’t athletes, they would be minorities in a speeding car smoking pot. Who are they trying to kid with the ‘no special treatment’ rhetoric…..if he didn’t smoke then he can probably pass a drug screen. -UA

By Rob Moseley The Register-Guard 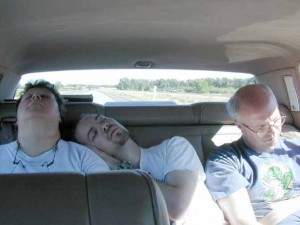 Oregon quarterback Darron Thomas said he was sleeping and did not participate in nor witness any marijuana smoking before a car driven by Cliff Harris was pulled over for driving 118 mph on Interstate 5 in June.

Dashboard video of the incident released this week by state police revealed Thomas’ presence in the car. The officer who pulled the car over suspected that the occupants had been using marijuana.

Harris was ultimately cited for speeding and driving with a suspended license.

After practice Thursday, Thomas said he considered the incident “a mistake.” He was previously a passenger during a 2008 accident involving safety Eddie Pleasant and a traffic stop last year that preceded Jeremiah Masoli’s departure from the team.

“Just a learning situation, growing up, learning from bad mistakes, trying to overcome them,” Thomas said of the most recent incident.

Thomas said he was not with Harris in Portland the evening before the traffic stop in the early morning hours of June 12. Thomas called Harris for a ride back to Eugene but said Harris was not driving when Thomas fell asleep in the car.

“I woke up, the police was right at the window talking about it,” Thomas said. “That’s all the facts I know.

“I found out we was speeding when the police told us.”

Regarding the suspicion that marijuana had been consumed, Thomas said he did not smoke in the car and did not witness the others doing so. The athletic department can subject athletes to drug testing only with probable cause, and Thomas said he’s never been tested while at Oregon.

Thomas said he discussed the incident with UO coach Chip Kelly soon after it occurred.

Kelly vigorously defended Thomas on Tuesday after the dashboard video was released, and several teammates in interviews since then have reinforced their belief in Thomas as a team leader.

Thomas and the Oregon offense won a scored competition day against the defense for a second straight week, winning Thursday afternoon’s battle 172-161.

Thomas helped the offense to a big lead in a 7-on-7 passing drill early in practice, and that unit held on the rest of the way.

“There’s a lot of stuff we need to get worked out, but I think guys are giving good effort,” junior guard Carson York said.

Junior Isaac Remington and sophomore Taylor Hart played tackle with the No. 1 defense. Those four plus JC transfer Jared Ebert are expected to rotate at the two tackle spots in games this fall.

Receiver Josh Huff continues to dress for and attend practice but sit out because of a leg issue. Receiver Blake Cantu attended but did not dress for Wednesday’s practice and was absent from both practices Thursday.

Eighteen Ducks reached “elite” status in Oregon’s strength and conditioning program over the summer, a record for the program.

Elite status is accorded for “improvement in every facet of the mobility, power, strength, speed and agility testing” conducted by strength coach Jim Radcliffe and his staff.

Rob Beard, Ramsen Golpashin, Bo Lokombo, Jackson Rice and York earned the designation this summer after also doing so in the spring. Among the other 13 honorees were Hart, Remington and Kenjon Barner.