Our view: A proposal to allow medical schools and hospitals to administer Maryland’s medical marijuana program holds out the prospect of a safe, practical way to help patients cope with severe pain or illness 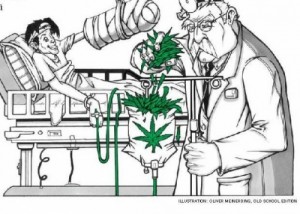 A panel that met Wednesday to explore whether Maryland should modify its marijuana laws may have come up with the most practical proposal yet to allow the medical use of marijuana by people suffering from chronic pain or illness, while discouraging the abuses that have plagued other states’ efforts to legalize the drug. The plan, which involves giving schools and hospitals the lead role in administering the drug, appears to offer the best chance yet of passing both legal and medical muster.

Maryland’s current approach to the medical use of marijuana is decidedly ambivalent. In 2003, the state legislature sharply reduced the penalties for patients convicted of possession of small amounts of the drug if they could prove a “medical necessity” in court. But the law still made possession of the drug a crime that left patients with a conviction on their records — and it made judges, rather than doctors, the ultimate arbiters of what is medically necessary. Most vexing of all, the law made no provision for people to buy the drug legally; as a result, even people who claimed a medical necessity had to break the law every time they purchased it.

This year, the state Senate passed a bill that would have allowed doctors to prescribe medical marijuana to some patients. It also established the framework for a strictly regulated network of state-sanctioned dispensaries and marijuana growers to supply the drug. But the effort stalled in the House of Delegates, largely because of questions raised by Maryland Health Secretary Joshua M. Sharfstein, who cited the lack of scientific consensus over the potential risks and benefits of medical marijuana. The proposal was also opposed by law enforcement organizations on the grounds it would be too difficult to limit marijuana use to medical patients.

Dr. Sharfstein has been working with the state panel that came up with this week’s proposal, which would put academic centers such as the Johns Hopkins University and the University of Maryland in charge of administering the state’s medical marijuana program and assessing its potential risks and benefits. This is an eminently reasonable approach that balances caution with the desire to help people who are suffering. While there is plenty of anecdotal evidence suggesting marijuana can help these patients, the state shouldn’t embark on a major shift in drug policy unless it has a firm scientific foundation to stand on.

Maryland’s highly regarded medical schools and teaching hospitals offer ideal laboratories for researchers to gather and analyze the data needed to either confirm or disprove marijuana’s therapeutic effects. That’s the only way to know for certain whether medical marijuana, which is already legal in 13 states and the District of Columbia, is effective as well as safe for patients to use. No one wants to repeat the experience of California, whose 1996 law legalizing medical marijuana led to a tsunami of neighborhood pot shops and physicians of questionable integrity who seemed all too eager to prescribe cannabis on the flimsiest of pretexts.

But neither should anyone have to risk jail and a criminal record for seeking relief for the kind of serious pain that cancer patients and other victims of debilitating disorders often endure. The state already allows doctors to prescribe opiates and other far more powerful medications to control the effects of such illnesses. If marijuana, administered under the supervision of medical professionals and with appropriate safeguards as to quality and content, can help make the lives of such people more comfortable and secure, the state should do whatever is necessary to make it available.