Marijuana DNA Sequenced by Startup in Search for Medical Uses

Once big pharma gets this, its lights out for most of us.-UA 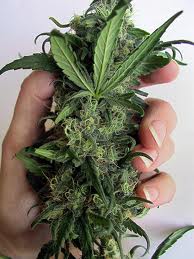 A year later, McKernan, 38, has quit his job, formed a startup run from his house in Marblehead, Massachusetts, and announced today that the company had sequenced the entire genome of the cannabis plant.

The project, which cost about $200,000, may lead to the development of treatments for cancer, pain and inflammatory diseases, he said. McKernan’s company, Medicinal Genomics, is making the data public using Amazon.com Inc. (AMZN)’s EC2 cloud- computing system. McKernan called the work a “draft assembly,” and it hasn’t yet been published in a peer-reviewed academic journal.

“This is the beginning of a more scientific approach to the genetics of the species,” Richard Gibbs, director of the Human Genome Sequencing Center at the Baylor College of Medicine in Houston, said in a telephone interview yesterday. “This is not really about marijuana; it’s about pharmacology.”

An important step to find a species’ potential utility is to map its DNA, the building block of life, according to Gibbs, who said he has known McKernan for more than 15 years.

McKernan worked on the Human Genome Project from 1996 to 2000, and started a commercial laboratory with his two brothers called Agencourt Bioscience, which was sold to Beckman Coulter Inc. in 2005. A spin-out of Agencourt that made sequencing technology, called Agencourt Personal Genomics, was acquired by Applied Biosystems Inc., which combined with Invitrogen Corp. in 2008 to become Carlsbad, California-based Life Technologies. Life Technologies bought Ion Torrent last year for $375 million in cash and stock.

McKernan said his company’s goal is to allow researchers to find ways to maximize the cannabis plant’s therapeutic benefits and minimize its psychoactive effects.

“These pathways can be optimized in the plant or cloned into other hosts for more efficient biologic production,” Medicinal Genomics said in a statement. “It may be possible through genome directed breeding to attenuate the psychoactive effects of cannabis, while enhancing the medicinal aspects.”

The plant makes chemical compounds called cannabinoids, a class that includes tetrahydrocannabinol, or THC, the main psychoactive substance in marijuana. Another such compound called cannabidiol, or CBD, has shown promise in shrinking tumors in rats without the psychoactive effects, McKernan said.

“That one has been predominantly bred out of the plant as it’s been bred for recreational use,” he said. His company’s business model is to develop assays to enable regulators, government agencies or pharmaceutical companies to research cannabis’s gene pathways.

Donald Abrams, a professor of medicine at the University of California, San Francisco, who has done research into medical cannabis since 1997, said scientists have been able to study the plant without knowing the genome.

“We know what the active ingredients of the plant are already,” Abrams, chief of oncology at San Francisco General Hospital, said in a telephone interview. “You don’t need the genome; you need the plant.”

McKernan said he was initially convinced to pursue the research after seeing papers published in academic journals including Nature on the plant’s tumor-shrinking effects in rats.

“One in three people are going to get cancer, and one in four are going to die with it or from it,” he said. “So any compound, as preliminary as this may be, that’s nontoxic and shows hope there, we should be all over.

“The only way I knew how to do that was to sequence the genome.”