Trooper to 118 mph Cliff Harris: ‘Who’s got the marijuana?’ 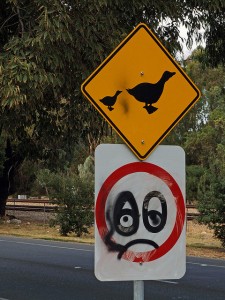 NEAR ALBANY, Ore. – Unedited dashboard camera footage from an Oregon State Police patrol car acquired by KATU News shows a trooper scolding Oregon Ducks stars Cliff Harris and Darron Thomas after pulling them over at 4:30 a.m. on a Sunday morning in June.

Harris was ticketed for going 118mph in a 2011 Nissan Altima and driving while suspended. His family paid the fine, which was over $1,600. The car had been rented by a University of Oregon employee.

Telemetry recorded on the video footage shows the OSP trooper pushing his patrol car to 141 miles per hour to catch the speeding Altima near Albany. Once his blue and red lights are activated, the Altima quickly pulls over.

The trooper then approaches the car with a flashlight, tells the men in the car they are being recorded and asks to see the hands of all those inside.

With traffic whizzing by, the trooper then begins a series of questions to the driver, who eventually identifies himself as Harris. “What’s the reason for the speed this morning?” he asks first.

The trooper asks if the passengers are going to school in Eugene. Harris responds “yes, sir.”

The trooper then asks “Who’s got the marijuana in the car?” Harris responds “we smoked it all.” The trooper responds “I don’t know if I believe that.” Harris reiterates that there are no drugs in the car.

He then asks if anyone in the car has ID. Someone offers their school identification. At that point, a Sheriff’s deputy arrives on the scene to assist and the two lawmen talk for a moment before the trooper begins talking again with Harris.

When the trooper asks to see the vehicle’s registration and insurance, Harris says the car belongs to his girlfriend, then later says it’s a rental car, then clarifies that the car was rented by his girlfriend and she let him use it.

“You guys all play football?” the trooper asks to everyone in the car. A chorus of “yes” is heard on the tape.

The trooper then turns his attention to the passengers in the car, asking one man his name. “Darron” is the response but a car goes by so the trooper asks again. “Darron Thomas” is the response, perhaps from Cliff Harris.

“Why you guys smoking dope and driving down the road at 118 miles an hour?” the trooper then asks.

“We’re just trying to get home,” is the reply, although it’s not clear who says it.

“How do you think [Coach] Kelly would like it if I called him?” the trooper asks. Someone in the car says “everybody in the car is not smoking dope.”

“How do you think he’d like it if I called and told him you guys are doing 118 miles an hour down the freeway – the star football players on the team?” the trooper asks again.

“No sir, he wouldn’t appreciate it,” is the response, but it’s not clear from whom. The trooper then asks how he thinks other drivers might feel being put at risk by the high-speed driving.

“Who’s been smoking dope?” the trooper asks without waiting for an answer to the previous question. The response, although it’s not clear from whom, blames the passengers in the back seat for smoking pot.

One person asks to put on their sweater and the trooper then leaves the vehicle and walks back to his patrol car.

While talking with the deputy who arrived on the scene, the trooper tells him that Darron Thomas is in the car. “Freakin’ dumbass,” the deputy responds.

When the deputy asks who in the car has been “smoking dope,” the trooper responds “I don’t know” and talks about clocking the car at 118 mph.

The two lawmen chuckle a bit over the situation and then the trooper asks aloud “I wonder what his license is suspended for?” He then remarks sarcastically “this is gonna look good, this is gonna make the news.”

The trooper then talks to someone on a cell phone and tells them he has Cliff Harris and Darron Thomas pulled over, then ends the call.

The trooper calls in Harris and Thomas for wants and warrants and Harris comes back as having a suspended license for driving uninsured in California.

After several minutes, the trooper gets back on a cell phone with an unknown party and says dispatch wants to send him somewhere but he “can’t let a 118 go” and tells the caller U of O football player Cliff Harris is in the car. “Do you know who’s with him? Darron Thomas,” he tells the caller.

He also says there are two other black guys in the back seat of the rental car and that no one in the car has a driver’s license “so I don’t know what to do here,” he says. “Yeah, no bueno,” he adds.

“Is that necessarily reckless, going 118? I don’t know,” the trooper tells the caller. He later says he might call his supervisor for guidance as he ponders the possible infractions.

By this time, almost 30 minutes has passed since Harris has been pulled over and dawn is beginning to break. The trooper than asks for an on-call supervisor via radio and then returns to Harris’ car.

The trooper again asks if anyone in the car has a driver’s license and a person in the back seat says he does. The trooper asks that person if he is sober enough to drive and someone says “everyone is sober,” but the trooper says he can tell he is high on marijuana. “I smelled the marijuana strong when I came up here, so…” the trooper says.

The trooper says that if he can see one valid driver’s license, he won’t tow the car.

The trooper again asks Harris why he was driving so fast and Harris responds he wanted “to get it [the drive] over with.”

The trooper tells Harris he could go to jail for driving that fast and then returns to his patrol car. He runs a check on a license for Tyrell Irvin, who was riding in the back seat of the car.

In a conversation with a supervisor via cell phone, the trooper says “I just want to do what’s right here, you know,” after explaining who is in the car.

The trooper says he clocked Harris at 118 miles per hour on radar and “he was going faster than that” but he was unable to pace the vehicle.

The trooper says Harris looks tired and his eyes “are blown” but the car was under control so he doesn’t feel a reckless charge is warranted. He notes that he smelled marijuana when he initially approached the car.

The trooper then asks Harris how much he has had to smoke but Harris says someone else in the car, a cousin, was using the marijuana. The trooper asks Harris to get out of the car for a sobriety test. Just before the test the trooper asks to see Harris’ Pac-10 championship ring.

Almost 50 minutes have passed since Harris was pulled over. A law enforcement officer from Linn County arrives and the trooper talks for a short time, saying he is going to cite Harris and let him go.

The trooper talks to Harris for a short time about his suspensions and then interviews Tyrell Irvin, the person with the valid license.

“You guys are a pretty important part of the program down there,” the trooper tells them four men in the car as he gives Harris his tickets. “You want to stay alive and be able to help your teammates out, stay in school and finish school and get on with your life, huh? Driving 118 miles an hour is not the best way to do that.”

Irvin passes the sobriety test and takes the wheel of the car and the men resume their trip to Eugene after Harris receives his citations.

In an off-camera conversation with the other law enforcement officer, the trooper talks about possible charges and how he would never give the football players preferential treatment.