Busts of marijuana grow houses are growing in Chicago area

Throughout the Chicago area, police are raiding more of the sophisticated indoor operations — with twice as many reported to a federal program in 2010 as in 2005

Maybe Jr. Obama could mention legalization to his big brother…..-UA 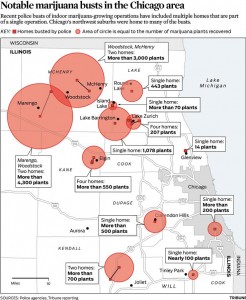 Nothing appeared amiss at the pale green ranch house on South Aldine Street, though oddly, the landlord noted, the electricity bill was enormous.

The young female tenant walked her dog before leaving each morning for her job at a beauty salon. She kept the lawn tidy, chatted occasionally with neighbors and dropped off her rent check, always on time, at Mary Swanson’s real estate office.

Only later did Swanson figure out why the utility bill was so high, after police swarmed the Elgin house on a September afternoon.

Her tenant was sheltering a marijuana-growing operation, with hundreds of plants sitting beneath high-power, commercial-grade lamps. Workers had torn out a laundry room, installed custom ventilation and water purification systems and set up insulated “staging areas,” where plants were nurtured from seed to harvest, police said.

“I have been a landlord for a long time, and these people pulled the wool over my eyes,” said Swanson, 47, whose tenant had blamed her $350 energy bill — three times that of her neighbors — on the air conditioning.

“I hadn’t had any issues whatsoever,” said Swanson, adding that her tenant’s credit and background check came back clean. “I would drive by, and she would be out with her dog.”

Elgin police ranked the drug bust as one of their largest, arresting five people after linking three more houses to the operation, all within the same west side neighborhood. Swanson owned two of them, which she said cost $18,000 to restore to their original condition.

Throughout the Chicago area, police have been aware of so-called grow houses and outdoor crops of less potent “ditch weed” for decades. But they are raiding more of the sophisticated indoor operations — with twice as many reported to a federal program in 2010 as in 2005.

Authorities say they believe the number of grow houses is on the rise, though much of their evidence is anecdotal, as there is no uniform method of reporting statistics. They have improved their ability to spot such houses, which manufacture highly potent marijuana that can fetch up to $5,000 per pound, according to the U.S. Drug Enforcement Administration. That compares to 800 to $1,500 per pound for the more common product transported from Mexico, officials said.

“There is a definite demand for that type of marijuana,” said DEA Special Agent Will Taylor, of Chicago. “It is a niche area. … The typical outdoor marijuana will have a low THC (tetrahydrocannabinol) content in comparison to the indoor.”

Some blame the bad economy for enticing a new breed of entrepreneurs into the pot-production field. Websites provide instructions on hydroponic planting techniques, equipment and nutrients to ensure the best grow. Meanwhile, marijuana for medical use has been legalized in 16 states, according to the National Organization for the Reform of Marijuana Laws. Illinois legislators narrowly rejected a bill calling for the legalization of medical marijuana in May.

Those arrested for harvesting pot do not fit simple stereotypes. In Schaumburg, an exercise physiologist was arrested for growing more than 50 marijuana plants in his crawl space. His case was dismissed on July 28 when a judge ruled that there was insufficient probable cause for the search warrant, his lawyer said.

“This isn’t your average street-level drug dealer because it takes such a large initial investment,” said Daniel Linn, 28, executive director of NORML’s Illinois chapter. “It takes a skill set, as far as the gardening goes. It isn’t as simple as planting tomatoes in the backyard and letting rain fall on it.”

Cannabis is one of the only drugs whose value has increased over the years, officials said, as buyers seek specific types of marijuana, such as seedless sinsemilla.

In one case, a group operating out of Wisconsin “were cloning their plants,” said Sgt. Andrew Douvris with the Cook County Sheriff’s Department. “Some of these guys had been doing this for 20 years, and they had a following.”

Pot growers often rent homes in moderate to upscale neighborhoods. Most prefer to rent, rather than buy, a home to avoid losing their assets if they are caught, Linn said.

Such growers usually try to avoid scrutiny, keeping the house and lawn maintained and traffic activity minimal, he said. Although they might seem harmless, police say, the grow houses pose hazards to neighbors. Often police find other drugs and weapons during their raids. Offenders, too, will divert or steal electricity, which can be dangerous, according to ComEd.

“A lot of times, the neighbors will call and say, ‘Hey this doesn’t look right,'” said Sgt. John Koziol, with the McHenry County Sheriff’s Department. “A lot of houses we have hit have a lot of visible mold outside the house. Some were $400,000 to $500,000 houses.”

Police have started to seek help from code enforcement officers, who might notice tipoffs like strong odors, extra exhaust fans, heavy condensation on the windows or electric meters that appear to have been tampered with. With a search warrant, police can also use a thermal imaging device that, when pointed at a house, can detect heat outdoors that is radiated from the intense lights inside.