Say no to drugs, say yes to cannabis. -UA 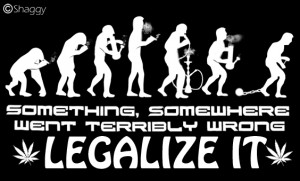 Another Angus-Reid Public Policy pollhas asked Americans about legalizing marijuana and their opinion of the War on (Certain American Citizens Using Non-Pharmaceutical, Non-Alcoholic, Tobacco-Free) Drugs.  And once again, for the third year in a row, a majority of Americans support legalization of marijuana.

The poll is a randomized and controlled online survey.  This format, unlike Gallup and other organizations that use telephone polls, may lead to more honest responses from those polled.  When asked in Gallup’s last telephone survey about marijuana legalization in October 2010, only 46% of Americans supported marijuana legalization.  Angus-Reid’s 2009 survey found 53% support.  In 2010 the support was 52% and in the survey just released, support had risen to 55% in favor of marijuana legalization, with only 40% opposed.

What we do have in this country is a “serious drug prohibition problem” and it is imperative that we better educate the public that this is what they are misidentifying as drug abuse problems.

Another finding: when asked whether the “War on Drugs is a success”, only 9% of Americans agreed, with a 2-to-1 margin, 67% saying it is a failure.  Still, almost a quarter of Americans said “Don’t Know”, indicating another area where we must increase our public education efforts.

As for legalization of drugs and cannabis, we find other interesting data.  The gender gap we see in polls like Gallup’s tightens in the online Angus-Reid poll.  Where Gallup showed a ten-point gap between men’s and women’s support for legalization of marijuana, Angus-Reid shows 57% of men and 53% of women support legalizing marijuana, a gap of only four points.  The online component provides less intimidation of the respondent and I believe women are less likely to be truthful about their support for legalization over the phone, where they hear another voice and imagine being judged as a “pothead”.  Still, we need to make up that four-point-gap.

Finally, all the prohibitionists who worry about a “slippery slope” and argue “well, if we legalize pot, what’s next, legal meth?” are going to have to find a new talking point.  While the poll shows 55% support for legalizing marijuana, there is but 10% support for ecstasy, 9% for cocaine, 8% for heroin, and 7% each for crack and meth.  Apparently Americans know the difference between cannabis and drugs.