I hate getting bad news on facebook…..-UA
BY MICHAEL MCNUTT newsok.com 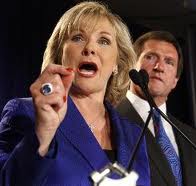 She also said she is concerned about what effects the prolonged drought — with no relief in sight — will have on the state’s agricultural and tourist industries. Afterward, the governor pleaded with parents and coaches to be mindful of continued hot weather when two-a-day football practices get under way next week.

“I just want to ask all of our schools and our coaches and our parents to be very, very careful with two-a-day practices,” Fallin said during a Facebook town hall meeting. “We’ve got to be really careful with our young students.”

“It’s just not worth it to take a risk with our young men who are starting the two-a-day practices and even the coaches — they’ve got to be very, very careful,” Fallin said.

Fallin suggested coaches adjust the times of practices and try to limit or avoid holding them in the hottest periods of the day. Plenty of water and later starting dates should be considered for outdoor activities, the governor said, noting that the starting time for a Tim McGraw outdoor concert this week at the Oklahoma City Zoo Amphitheater was moved back a couple times, with McGraw not performing until 9:30 p.m.

Fallin was the first person featured on the Facebook town hall meeting sponsored by the Oklahoma Republican Party. She spoke by a streaming live video feed from the GOP headquarters in Oklahoma City and answered several questions posed on the party’s Facebook page.

Dozens of people asked whether the governor supported legalizing marijuana in the state.

“I’ll just be right upfront with you and tell you that I oppose legalizing marijuana in Oklahoma; it’s not something that I support,” Fallin said.

The governor said her opposition is derived mostly from her going through pardon and parole requests, where inmates’ troubles usually can be traced to drug abuse. Of about 475 cases she reviewed last month, she estimated as many as 90 percent included substance abuse problems.

“I just feel like that marijuana use, if it’s legalized, will lead to possible other substance abuse.”

Legalizing marijuana also could lead to other risks, such as motorists high who are high causing accidents, she said.

“I just am afraid there’d be too much abuse with medical marijuana if it were legalized in the state of Oklahoma, and I just can’t support that,” she said.

On the topic of the drought, Fallin said it could cripple the slow, steady economic recovery the state has seen in the past year.

Fallin said she also is concerned how the drought has affected the tourist industry.

Reports of stagnant water in some lakes have resulted in fewer visitors this year.