DENVER– The full legalization of marijuana has been in the Colorado 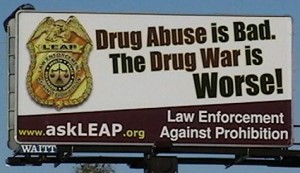 spotlight for some time. Now former members of Colorado law enforcement are
stepping out in the public to turn heads and get the issue on the 2012
ballot.

“We should be teaching our kids to make intelligent decisions and
stop wasting our time with this good drug bad drug crap,” says Leonard Freiling,
a former Lafayette Judge.

“We’re against the entire war on drugs and
marijuana is the biggest part of that,” says Tony Ryan, a retired Denver Police
Lieutenant.

Both Freiling and Ryan are members of LEAP; Law Enforcement Against
Prohibition. They spent part of Wednesday afternoon collecting signatures in
front of the Denver City and County building, hoping to put the full
legalization of marijuana on the 2012 ballot.

“If you legalize it and
regulate it then you don’t have the black market anymore it gets rid of all of
that violence everybody is worried about,” adds Tony Ryan. “Any step in the
right direction to ending prohibition so we can actually regulate and control
drugs as opposed to making it illegal because when it’s illegal you can do
nothing else accept arrest people and put them in jail.”

If approved, the
measure would make marijuana legal for adults over the age of 21.

“My
biggest concern on legalizing marijuana is the impact it’s going to have on
kids,” says Don Quick, Adams County District Attorney. He says years of research
contradicts marijuana advocates.

“I think they’re using their own
interests and anecdotal knowledge to say the legalization won’t impact the
community in a bad way and the research is 180 degrees in the opposite
direction.”

Quick also says legalizing drugs is not something Colorado
has a whole will likely support.

“There is a statewide proclamation where
hundreds of officers and prosecutors are signing their opposition. The fact that
three [former law enforcement members] think pot should be legalized, I don’t
think is going to have a big impact.”

The marijuana advocates need to
collect 86,000 valid signatures by January 6th to be on the 2012
ballot. So far they have collected about 10,000 before their deadline on January
6th.